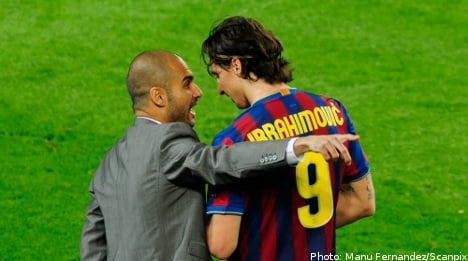 Swedish forward Zlatan Ibrahimovic revealed that his Barcelona boss Pep Guardiola hardly ever speaks to him as speculation linking him to a switch to AC Milan mounts.

The 29-year-old played for Barca in a friendly against Milan in Spain on Wednesday night, after which he told reporters that he had no relationship with his club coach, although he claimed he knew nothing about Milan’s reported interest.

“I haven’t heard anything and I don’t know who wants me,” he told Sky Sport 24.

“In six months I’ve spoken twice to the boss, I don’t know what the problem is, I can’t answer that.”

“I have a contract with Barcelona and I’m also wondering what the problem is with Guardiola and I don’t know.”

“If I speak to the club management they say they don’t want to sell me but I don’t speak with the coach.”

Asked a very direct question if he would like to play alongside Milan’s Ronaldinho, a former Barca star, Ibrahimovic replied in the affirmative.

The speculation about a possible move for the Swede started when Barcelona splashed out 40 million euros on Spain forward David Villa from Valencia.

Many saw him as a replacement for Ibrahimovic as the Catalans’ central striker.

The problem facing Milan, though, is that only a year ago Barcelona forked out 50 million euros plus Samuel Eto’o to bring the Swede to the Nou Camp.

Milan vice-president Adriano Galliani admitted the two teams were in discussions but said money was a stumbling block.

The Italians recently arranged a complicated loan agreement with Genoa to land Ghana midfielder Kevin-Prince Boateng because of their lack of funds.

Genoa bought Boateng and loaned him immediately to Milan with the view to selling him at a profit in a year, when Milan have some money.

However, following a meeting on Thursday between Galliani, Barcelona president Sandro Rosell and Ibrahimovic’s agent Mino Raiola, the Milan number two said his club are trying to find a solution.

Rosell is due to leave for Ibiza for the rest of the week but Galliani said he has until Tuesday to find a compromise.

“I’m not going to Ibiza with Rosell but we’ve agreed that if there’s a contract to sign, he’ll return to Barcelona,” he said.

“We’ve decided to buy Ibra, we’re not talking about a loan deal any more.”

“Both Barcelona and ourselves have clarified our points of view and so we’re working on buying and not loaning him.”

“But the road is long and I’d say we’ve got a 50-50 chance. However, (Marco) Borriello won’t be sold although we’re in discussions to sell (Klaas-Jan Huntelaar), although that depends on him.”

Raiola, who previously had said the player was 99.9 percent sure to stay in Spain, said Ibrahimovic may have to take a pay cut if he is to join Milan.

“It’s not nice taking a pay-cut but sometimes it’s necessary to seal a deal,” he told Sky Sport 24.

Before the meeting he had revealed that the two sides were still poles apart from a financial agreement.

“It’s a difficult deal, the two parties are a long way from an agreement,” he said.

“Obviously Ibrahimovic is following the evolution of the negotiations, it will be a long week full of meetings but luckily Ibrahimovic’s club aren’t asking him to leave, so he’s calm.”

There is just under a week left before the transfer window closes until January.