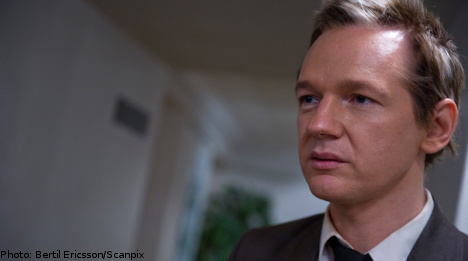 Leif Silbersky, one of Sweden’s top defence attorneys, said police had questioned his client in his presence for about an hour Monday evening and that the interrogation went “very well.”

“I expect the prosecutor will drop the whole thing,” he told AFP.

A Swedish duty prosecutor issued an arrest warrant for Assange on the evening of Friday August 20th over an allegation of rape but chief prosecutor Eva Finné abruptly withdrew it the next day, saying new information had come to light.

Then last week, Finné said there was no reason to believe a crime had been committed in that case, but said she had enough evidence to continue probing a molestation allegation from another woman against the 39-year-old Australian.

“The whole story is very bizarre,” Silbersky lamented Tuesday, pointing out that his client had faced “different prosecutors and different charges that have now basically boiled down to nothing.”

Meanwhile, the lawyer of the two women who have made the accusations against Assange said last Friday he had appealed the prosecutor’s decision not to open a rape probe.

Assange himself has said the allegations against him are part of a “smear campaign” aimed at discrediting his whistleblowing website, which is locked in a row with the Pentagon over the release of secret US documents about the war in Afghanistan.

WikiLeaks published nearly 77,000 classified US military documents on the war in Afghanistan on July 23 and has said it will publish another 15,000 within the next week or so.