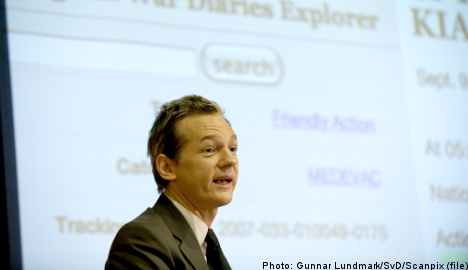 “He has applied for permission to work and stay in Sweden and (the request) came in on August 18,” Haakan Gestrin told AFP.

He added it was not possible to give more details about the 39-year-old Australian’s application because it had not yet been processed.

agency TT that the application was on hold since some information was missing, but did not provide further details.

Assange’s application was submitted shortly before rape and molestation allegations against him by two Swedish women were made public.

A Swedish duty prosecutor issued an arrest warrant for him on August 20th over a rape claim, which was later abruptly withdrawn by chief prosecutor Eva Finné the next day, saying new information had come to light.

Then last week, Finné said there was no reason to believe a crime had been committed, adding however that she had enough evidence to keep looking into a

molestation allegation from the other woman against Assange.

Police questioned Assange about the allegation on Monday, and his lawyer told AFP on Tuesday he expected the prosecutor to “drop the whole thing.”

Assange himself has called the allegations part of a “smear campaign” aimed at discrediting his website, which is locked in a row with the Pentagon over the release of secret US documents about the war in Afghanistan.

WikiLeaks published nearly 77,000 classified US military documents on the war in Afghanistan on July 23, and it intends to publish another 15,000 within the next week or so.