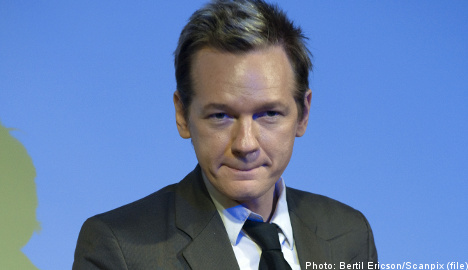 “There is reason to believe that a crime has been committed. Considering information available at present, my judgement is that the classification of the crime is rape,” director of prosecutions Marianne Ny said in a statement.

“The basis for further considerations is not sufficient at the moment. More investigations are necessary before a final decision can be made (concerning possible charges),” she added.

A Swedish duty prosecutor issued an arrest warrant for Assange on August 20th over rape allegations. But chief prosecutor Eva Finne abruptly withdrew it the next day, saying new information had come to light.

Then last week Finne said there was no reason to believe a crime had been committed, adding however that she had enough evidence to keep looking into a molestation allegation from another woman against Assange.

The lawyer for Assange’s alleged victims, Claes Borgstroem, lodged an appeal against Finne’s decision to a special department in the public prosecutions office.

Assange, 39, has said the allegations against him are part of a “smear campaign” aimed at discrediting his whistleblowing website, which is locked in a row with the Pentagon over the release of secret US documents about the war in Afghanistan.

Ny, head of the department that oversees prosecution of sex crimes in particular, overturned Finne’s decision on the rape claim, and also said the investigation into the molestation claim would be extended.

“Based on the information available, the crimes in question come under the heading of sexual coercion and sexual molestation,” she said.

Ny told AFP that overturning another prosecutor’s decision was “not an ordinary (procedure), but not so out of the ordinary either.”

“In this investigation, I have decided it should continue and we will decide on measures, including interrogations” of the suspect, she said, refusing to provide more details.

She would not say when or if an arrest warrant for Assange would be issued.

“He is a suspect,” she reiterated.

Assange was already questioned by police late Monday in connection with the molestation claim.

His lawyer, Leif Silbersky, who is one of Sweden’s top defence attorneys, had told AFP the interrogation went “very well” and that he expected the prosecutor to “drop the whole thing.”

On Wednesday, he told the TT news agency however that “nothing in this matter surprises me anymore.”

“Two prosecutors want to inform (Assange) that he is suspected of rape and the third not at all,” he said.

“I am showered with phone calls from media from around the world and they don’t understand anything at all and I hardly do either,” he added.

Claes Borgström, the alleged victims’ lawyer, meanwhile said, “I am very happy that the preliminary investigation has been reopened and that basically my request has been granted.”

WikiLeaks published nearly 77,000 classified US military documents on the war in Afghanistan on July 23, and intends to publish another 15,000 imminently.