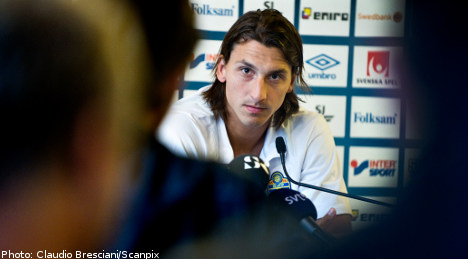 “In my book, a great coach solves his problems. A small-time coach runs from them,” the 28-year-old Sweden forward told a press conference in Stockholm.

me,” he insisted, explaining why he left the team and signed for AC Milan over

the weekend on an initial one-year loan with a pre-arranged €24 million ($31 million) permanent deal arranged for the end of the season.

He had spent just one year in Spain following a €50 million plus Samuel Eto’o switch from Inter Milan.

“I have never had problems with any coach before during my career,” he said.

“But suddenly I had a thousand problems and I had no communication with ‘the Philosopher’. No communication whatsoever. I don’t know what his problem was,” he said of Guardiola.

“I couldn’t take it. I had no choice but to find a new place of work and I was lucky to go to a club like Milan. I am 28 years old and can not afford to lose a year sitting on the bench and watching the weather,” he added.

Ibrahimovic is in Stockholm with his national team for a Euro 2012 qualifier against Hungary on Friday.