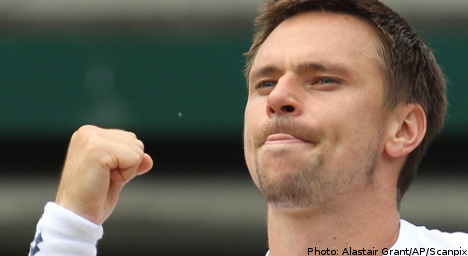 “I’m pretty confident. I know I can do well when I play well,” Söderling said. “But you need to play well. No one can play well every match. So anything can happen. I can lose first round. I can go on really deep as well.”

Elsewhere Roger Federer and Caroline Wozniacki advanced easily into the third round of while Maria Sharapova, Novak Djokovic, showed why they, along with Söderling, are title contenders as well.

Five-time US Open champion Federer will face 109th-ranked Paul-Henri Mathieu to decide a fourth-round berth on the Flushing Meadows hardcourts.

“Body is well. Mentally obviously I’m fresh, too. I haven’t played too much, so I’m really eager. I’m ready for tough matches coming around. It’s good I’m saving myself, really, and my game is fine.”

Danish women’s top seed Wozniacki blanked Taiwan’s Chang Kai-Chen 6-0, 6-0 in 47 minutes, her 11th match victory in a row after titles at Montreal and New Haven leading into the Open. She has dropped only two games in two matches.

“I go out there and I don’t give up. I don’t give any free points away and that is one of my strong points,” Wozniacki said. “I am feeling fresh, all recovered from everything. I am happy to be playing injury-free. It’s perfect.”

Russian Sharapova routed Iveta Benesova of the Czech Republic 6-1, 6-2, moving closer to a fourth-round showdown with Wozniacki. The 2006 US Open winner struggled with injuries last year but is back on form now.

“Last year here, the position I was in, I was trying to see where my game was, so it’s nice to be back on the court and not having to worry about anything other than trying to win,” Sharapova said.

Djokovic reached the 2007 US Open final and the Flushing Meadows semi-finals the past two years, each time losing to Federer, whom he could again face in the semi-finals.

“It’s important to save energy in the opening rounds,” Djokovic said.

“Overall I can be satisfied with how I played. I played well when I needed to and was a little bit lucky.”

Gasquet, among a record 12 Frenchmen to reach the second round, lost only seven of 52 points on his first serve as Davydenko made his quickest US Open exit since 2005.

“I was cramping from the second set but I kept fighting and fighting and got the fourth set tie-breaker. That was key for me,” Nishikori said.

“I was not 100 percent in my first match and was missing the easy ball, but that was better today and I’m looking to play even better from now on,” Chan said.