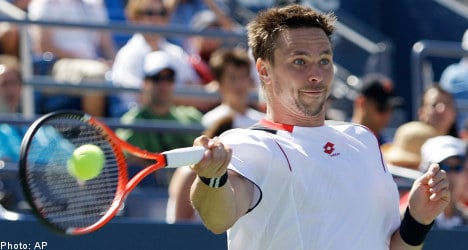 The Swedish fifth seed, who ended Federer’s run of 23 Grand Slam semi-finals in a row with a French Open quarter-final upset, defeated 48th-ranked Dutchman Thiemo de Bakker 6-2, 6-3, 6-3 in brisk winds after one hour and 42 minutes.

“It was very tough. I was fighting the wind the whole time. During these conditions I played a pretty good match,” Söderling said.

“It’s great to make it to the second week at the US Open. It will be very big next week.”

Söderling will play for a berth in the quarter-finals against Spanish 21st seed Albert Montanes, who led 6-2, 2-1 when 147th-ranked Japanese qualifier Kei Nishikori retired after only 38 minutes with a groin injury.

Federer and Söderling are on a collision course with added drama after Söderling’s confidence-boosting French Open stunner.

“Confidence is a really big thing in this sport,” Söderling said.

“Matches are only decided by a few points.

Söderling, whose best US Open showing was last year’s quarter-final run, made 30 winners and only 19 unforced errors and claimed six of the seven service breaks in the match to cruise.

DeBakker, 21, was ousted in the third round for the fourth Grand Slam event in a row. No Dutchman has reached the last 16 at a Slam since Sjeng Schalken in 2004 at Wimbledon.

Five-time US Open winner Federer hit 13 aces and 31 winners in brisk winds that tested even his formidable skill to down 109th-ranked Frenchman Paul-Henri Mathieu 6-4, 6-3, 6-3, and reach the last 16.

Söderling, who lost the Roland Garros final to top-ranked Rafael Nadal, and world number two Federer each need one more victory to book a rematch on the Flushing Meadows hardcourts after third-round triumphs.

“Everybody has been telling me since the draw came out I’m playing Roger in the quarters. It’s still far ahead,” Söderling said.

“It’s always difficult to play against Roger and I have played him a lot of times. In any tournament they play, Roger and Rafa will be the favorites, but there are a lot of players who can beat them.”

Federer, trying for his seventh US Open final in a row, next faces Austrian 13th seed Jurgen Melzer, whom Federer ousted in this year’s fourth round at Wimbledon in their only prior meeting.