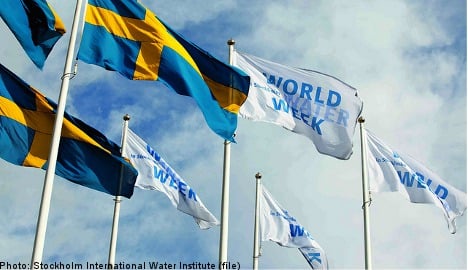 “Driven by demographic change and economic growth, water is increasingly withdrawn, used, reused, treated, and disposed of,” organisers cautioned in their introduction to this year’s conference, now in its 20th year.

“Urbanisation, agriculture, industry and climate change exert mounting pressure on both the quantity and quality of our water resources,” they added in a statement on the conference website.

The meeting, which kicks off Sunday and is scheduled to last until September 11, will draw around 2,500 experts from around 130 countries to discuss the theme: “The Water Quality Challenge — Prevention, Wise Use and Abatement.”

The picture is bleak, according to the Stockholm International Water Institute (SIWI), which organises the conference each year.

“Water pollution is on the rise globally,” the institute said, pointing out that each and every day, approximately two million tonnes of human waste is poured into rivers, lakes and the sea.

And in developing countries, a full 70 percent of industrial waste is dumped straight into waters without being treated, severely polluting the usable water supply.

“Climate change is really mainly about water and it has huge implications for water pollution,” he told AFP, pointing out that global warming is changing weather patterns and essentially causing massive flooding in some areas and severe droughts in others.

This is a big problem due to the way water interacts with pollutants.

“If there is too much water, it flushes out much more in the way of pollutants, spreading them around … but if there is a drought, there is less water in rivers and lakes to dilute the pollutants there and they do more harm,” Berggren said.

“In both cases there is more pollution,” he lamented.

The growing pollution in turn leads to a number of very serious challenges and contributes to declining access to clean water around the world, affecting human health and ecosystems both on land and at sea.

The United Nation’s Food and Agriculture Organisation (FAO) estimates that within the next 15 years, 1.8 billion people will be living in countries or regions with acute water scarcity, and that a full two-thirds of the world’s inhabitants could be facing shortages.

But as daunting as the task may seem, Berggren insists the problem of pollution and water scarcity can be solved.

“There is really no physical water shortage in the world,” he said, stressing that “there is actually lots of water.”

According to Berggren, “it is how the water is managed that is the big problem,” and that is something it is possible to change.

Exactly how to bring about change will be a major focus of this week’s conference.

Especially important, experts say, is to raise awareness of how inter-connected global water systems are to shine the spotlight on the true effects of pollution.

“There is often a disconnect for people that pollute and the effects of that pollution on people and ecosystems downstream or in other parts of shared lakes and aquifers,” SIWI said.