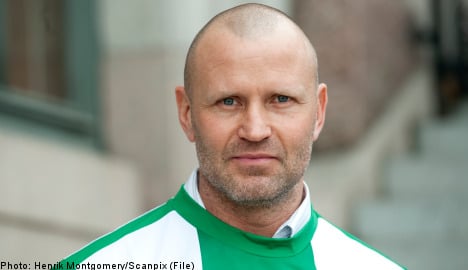 “It is completely unacceptable that our employees receive threats in this way and this is the result,” said Hammarby Fotboll AB CEO Åsa Sånemyr in a statement from the club on Monday.

Since being relegated from Sweden’s top flight in 2009, Hammarby, one of four professional clubs in Stockholm, has experienced tough times both on and off the field.

The club is currently languishing in mid-table of Sweden’s second division, a full 14 points off the pace. After a more promising start to the second half of the season the team has begun to drop points with criticism of Borgqvist intensifying as a result, now confirmed to have extended to threats against him.

“It is awful that this is happening,” Sånemyr said.

“It is most regrettable that Micke feels forced to leave his post and it is frustrating that we lack the tools to rid ourselves of this type of incident.”

Sånemyr recognised that Borgqvist and co-trainer, former Manchester United winger Jesper Blomqvist, have had to work with very limited resources as the club has battled to ward off bankruptcy amid serious financial difficulties.

The club announced last week that it had agreed to sell star striker Linus Hallenius to Italian Serie A club Genoa in a move to help bolster finances. The announcement however lead to a boardroom crisis with chairman Henrik Wesslén forced out, and Sånemyr submitting her resignation.

The club have confirmed that Blomqvist will remain in his post until the managerial issue is addressed by the Hammarby Fotboll AB board.