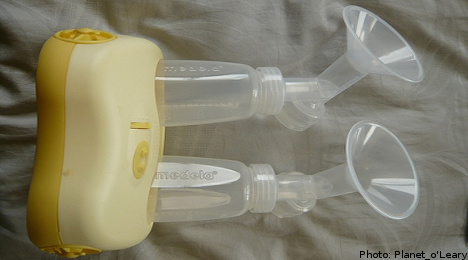 The Left Party stands for a policy of dividing parental leave equally between parents – meaning around seven months of paid leave each. Currently couples have 60 allocated days each with the remaining 270 days divided freely.

The party has not managed to impose the requirement on its Red-Green coalition partners, the Social Democrats and Green Party – despite their respective party members also being in favour – as it was deemed to lack support among parents and the wider electorate.

But despite the fact that the centre-left trio’s joint election manifesto does not include the demand, Ohly took the opportunity of Sunday evening’s party leader cross-examination on Sveriges Television (SVT) to push the case for the introduction of legally stipulated quotas.

Ohly recommended the use of a breast milk pump to address any problems of the mother not having finished breastfeeding the child prior to handing over the parental ropes to her partner.

“I was home with each of my children for eight months. My ex-wife used a breast pump, one of those modern tools that exist which… meant that it worked very well to enable me to continue to give my children breast milk. That still works today, as far as I understand,” Lars Ohly said.

Ohly’s comments raised ripples of laughter in the studio and became something of a talking point in the mainstream and social media on Monday. Green Party spokesperson and mother of two, Maria Wetterstrand, was not as amused.

“I am not going to have any opinions on whether people should use a breast pump or not. I don’t think it is of interest for voters,” she said to news agency TT.

Social Democrat leader Mona Sahlin rejected the assertion that Ohly’s comments should be interpreted as a political manoeuvre to raise the profile of the issue.

“It was no manoeuvre, it was a less clever way of answering a question,” Sahlin told TT.

Anna Herting at breastfeeding advice service Amningshjälpen told The Local on Monday that the proposal is hardly practical if the child is still breastfeeding full time.

“If the woman wants to go back to work, and the family want to carry on with breast milk, then it would require a flexible employer to allow the working mother to pump out her milk and transport it home during the day.”

When asked whether a mother could pump out sufficient milk in the evening to be used the following day, Herting replied:

“She would need that milk to feed the child in the evening, and using a breast pump can be problematic for many women.”

Lars Ohly on Monday morning also seemed to distance himself from his breast pump comments.

“I think that most women are okay with finishing breastfeeding after five or six months,” Ohly said on SVT’s God morgon programme, a comment which has drawn further criticism.

“It is not for a politician, but for every family, to decide how long to breastfeed. It has to depend on the family’s situation,” Anna Herting told The Local.

Herting explained that Swedish recommendations are for full-time breastfeeding for six months and then part-time for the remainder of the year, but that the choice has to belong to the families themselves on what is best for all parties.