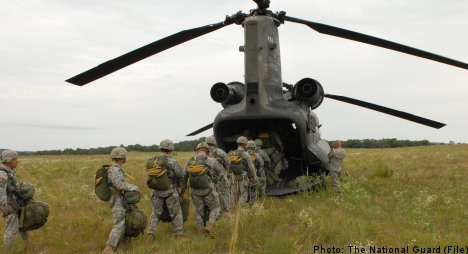 There are approximately 300,000 US military personnel stationed at bases scattered across thirty-something nations worldwide. Many states rely on international cooperation to ensure stability and defend their sovereignty, and more often than not, these measures include some sort of agreement with the United States of America.

Nations with a history of conflict, nations without a strong defense of their own, nations with neighbors who can’t be trusted – they all lean on the presence and promises of a United States which accepts responsibility for defending territories far beyond American borders. The list includes Japan, South Korea, Germany and Turkey – to name a few.

It is the bases in these countries – and others – that the Swedish left wants to close down have the soldiers sent home. Which begs the question, what exactly is the security policy analysis behind such an idea?

Mike Winnerstig, head of research at the Swedish Defence Research Agency (FOI), refused to speculate on what lay behind the suggestion, but says it would be unfortunate if the proposal became reality.

“If the US left Europe, trouble would be on its way. Surrounding nations don’t trust Germany and Russia, and the American presence has an important function,” he explains.

“If the US left Asia, that would be even worse. Nations like Japan, Australia and South Korea – currently protected by the US nuclear umbrella – would be pushed into an arms race, possibly acquiring nuclear weapons of their own. This is the opposite of a policy of peace and stability.”

If not primarily a measure of security policy, what then could explain the urge to call for America’s retreat? Ulf Bjereld, professor of political science at Gothenburg University, points to differences among the three parties of the Red-Green coalition.

“You have to consider that the phrase means different things for different parties,” he says.

“For the Green Party and the Left Party, this is the idea of disarmament and a belief that a superpower can take the lead. For the Social Democrats, and this is my personal opinion, there’s no thought at all. More likely, this is a mishap during the negotiation leading up to the coalition, a choice of words that slipped by negligently.”

Negligent or not, can a nation require the disarmament of another?

After all, the nations under American protection requested outside help and the US met their demand. If Sweden were to object, could they do so without violating international law? Mark Klamberg, a PhD candidate in international law at Stockholm University, provides some insights.

“There are two relevant principles of international law. One is the principle of sovereignty and the other is the non-intervention principle: one state should not interfere in the internal affairs of another,” Klamberg explains.

“Since we’re dealing with states that have given their consent to an American presence, sovereignty is not an issue. Would it then be an unlawful intervention if Sweden were to comment on the placement of military bases? No, I think not. But if it’s politically appropriate is still questionable.”

In practical terms, what should we Swedes do if we wish to tell the US that we no longer accept their military presence around the world? Do we contact their embassy here? Will we use our embassy there or will Social Democratic party leader Mona Sahlin, the presumable prime minister under a Red-Green government, phone Barack Obama?

Perhaps the press service of the Swedish Foreign Ministry has some ideas.

“Well… You’ll have to ask those behind this proposal, how they plan to do it. There are many ways, but which one to choose is up to them,” a foreign ministry spokesperson explains.

Anyway, we need to get in touch. How would the US react when we do? At the US Department of State, the press center spokesperson offers a long silence upon hearing the content of the red-green agreement.

“They will demand that the United States …?”

“…close down its bases overseas? All bases?”

The third “yes” is followed by an even longer silence. Eventually, the press office asks for contact details and promises to get back with an official response. Half an hour later, they do.

“It’s a hypothetical situation we can’t comment on. We prefer to keep out of the Swedish election campaign.”

At the German Embassy in Stockholm, press attaché Conradin Weindl also turns quiet when confronted with questions about the proposal. He asks for time to consider an answer and after a few hours he responds that Germany will not comment on the Swedish election campaign, but also that Germany is an ally to the United States of America.

“We are pleased with, and grateful for, the American presence in Europe. Including Germany.”

South Korea’s representation in Sweden is of the same opinion. First they seem to have difficulties absorbing the idea, then they ask for some time to think about it, and finally they come back with an official statement:

“We do not want to interfere in Sweden’s domestic affairs, but we will continue to enlist the help of the United States to defend our borders.”

But not everyone rejects the proposal. At the North Korean Embassy in Stockholm, Mr. Pek explains that the American presence is the main cause of the tensions between the North and South of Korea. He welcomes the Red-Green initiative.

“Of course this would be a good solution to the situation on the Korean peninsula!” says Mr. Pek.

“The presence of foreign forces in the southern part of Korea is contrary to the will of the Korean people. If the US were to withdraw, it would be for the benefit of peace, freedom and the reunification of an independent Korea.”

“A US withdrawal would mean a military detente and disarmament on the Korean peninsula. The Swedish-Korean Society is part of the anti-imperialist movement, and thus we are of the perception that all the imperialist countries, particularly the US, should be forced to withdraw its military forces from other nations. We are in favor of the Red-Green proposal.”

So far, everyone, no matter what they think of the idea of American retreat, have been gracious (courteous, even) during conversations on the issue.

But that streak of good humour ends when Peder Palmstierna, press secretary of the of the Social Democratic foreign policy spokesman Urban Ahlin, is asked to comment. In fact, he actually gets angry as soon as the case is presented.

“There is no such proposal. The debate about this is idiotic, a hype from the center-right alliance,” he says.

But in your manifesto…

“That’s half a sentence, taken out of context.”

But according to the Left Party…

“Read the article Urban Ahlin wrote on [the political debate forum] Newsmill and write whatever you want to write. You can continue down this route if you feel like it, but it is a bit hypocritical. Our stance is that it’s natural for the US to take the lead for disarmament. We of course have the same requirements of other major powers.”

The Red-Green position is (in one complete sentence):

A Red-Green government will demand that the US dismantle its nuclear weapons and military bases outside its own borders.

Ahlin says (in Newsmill) that this should be interpreted as a requirement that the US “dismantle its nuclear weapons and reduce the number of bases “.

In other words, a Red-Green government in Sweden will demand that US military bases around the world are abandoned.

Neither security experts nor the nations enjoying American patronage think it would be wise to withdraw US military forces. The US sees this as a hypothetical situation, but it would be both practically and legally possible for Sweden to demand a US withdrawal.

Should this happen, North Korea and their Swedish friendship club will applaud. That’s a summary of the foreign policy situation ahead of the elections. And Peder Palmstierna won’t be happy to read it.

Editor’s Note: This article first appeared in the September 2010 issue of Neo magazine, a “classically liberal magazine focusing on politics, society and the future”.