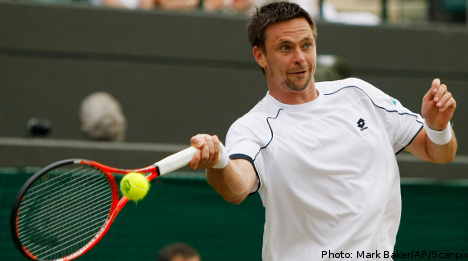 On a wind-whipped night at Arthur Ashe Stadium, Federer was able to fight through the gusts and serve well, connecting on 64 percent of first serves and hitting 36 winners, 20 more than Söderling, who struggled with his serve.

“Tough conditions,” Federer said. “I’ve practiced my serve a whole lot my whole career. If I can’t serve in the wind I’ve got a problem. You can wake me up at 2 or 4 in the morning I can still hit serves.”

Söderling, ousted by Federer in a quarter-final last year as well, has never reached a US Open semi-final.

“I didn’t put so many first serves in because of the wind,” said Söderling who connected on 57 percent of first serves.

“He served really good. He was brushing the lines at times, which is not easy in weather like this. He served much better than me.”

Federer had won all 12 career matches against Soderling before losing to the Swede in this year’s French Open quarter-finals, snapping an amazing run into 23 consecutive Grand Slam semi-finals by the Swiss superstar.

But foiling Federer on the red clay of Paris is one thing and denying him on the Flushing Meadows hardcourts where he has dominated for years is quite another, as Soderling found out to his dismay.

Federer saved three break points in the second game of the match and another in the sixth before taking advantage of his only break chance of the first set, landing a forehand drop volley winner in the seventh game to claim the set.

A double fault by Söderling handed Federer a break and a 2-1 lead in the second set. But after an exchange of ends gave him a wind advantage, the Swede smacked a backhand winner in the next game to pull level.

Söderling had an overhead smash to hold at love in the fifth game but netted it and dropped the next four points as well, the last on a Federer forehand winner for the break.

Federer then held at love for a 4-2 advantage on his way to taking the set.

In the third set, Söderling broke Federer in the eighth game and served to force a fourth set, but was broken back by Federer.

In the 11th game, Federer dropped a slice lob into the wind that Söderling blasted long and when the Swede sent another forehand long, Federer had two break points.

Federer capitalized when Söderling hit a backhand wide to surrender the break and held serve at love in the final game, hitting an ace on match point to advance after one hour 56 minutes.

“I was against the wind and he played a good game when I served for the third set,” Soderling said. “The margin was small, just a few points here or there, but he played good at the end.”