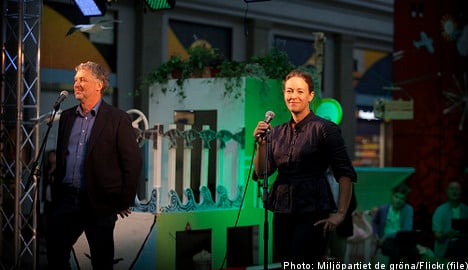 “It is totally out of the question because Reinfeldt is not open to such a possibility,” Eriksson said on Thursday. “It is not on the table.”

He referred to Prime Minister Fredrik Reinfeldt making it clear that if the Sweden Democrats and the Alliance registered the most support, he would continue to govern under a minority government.

This would be the wrong way to go, according to Eriksson, who believes that the most important thing is to ensure that there will be a majority government. If neither coalition wins a majority, there must be talks, he said.

“I am troubled by Reinfeldt’s stance, that he wants to give the Sweden Democrats a unique position of power by holding a minority government,” said Eriksson.

“It is terrible, it is not good for Sweden. Reinfeldt is giving opportunity to the Sweden Democrats, that with every question, it could threaten votes for the Red-Greens and this is [Sweden Democrats leader] Jimmie Åkesson’s wet dream,” he said.

Eriksson also excluded the Greens from a position that would give the Alliance government support.

“The days have passed since the Greens were a support party,” he said. “We are working for a red-green government. If it were against all odds to form a clear majority, we would invite the Liberal and Centre Parties.”

Of the Greens’ 26 regional party heads, 18 said they would be willing to abandon the centre-left Red-Green coalition to keep the far-right Sweden Democrats out of government.

Within the Alliance, the party would prefer to cooperate with the Centre and Liberal Parties, the Svenska Dagbladet (SvD) newspaper wrote on Thursday.

While the Greens’ desired outcome remains achieving a Red-Green majority government, the next best situation for the party would be to cooperate with the Centre or Liberal Parties, according to SvD.

Nevertheless, it remains unclear what the Greens would do if they woke up on September 20th to an uncertain parliamentary situation which included a xenophobic party holding the balance of power.

The response to inquiries from SvD to the Green Party’s regional chairs creates a very clear picture of what might happen: the Greens should work for a stable majority government in parliament, even if the price to pay is collaborating with the Alliance coalition at the government level.

“Personally, I, along with many others, will not accept any form of influence from the Sweden Democrats. Definitely not,” Ann-Catrin Lofvars from Dalarna in central Sweden told the newspaper. “It’s priority number one for many of us, you should know.”

Most regional chairs neither could nor would specify what such a collaboration would look like.

“It is a hazy question and entirely hypothetical,” said Magnus Johansson, the convener of the Greens’ executive committee.

“Prime Minister [Fredrik] Reinfeldt has clearly stated that he could imagine remaining in office in a minority government with the indirect support of the Sweden Democrats.”

The Greens’ spokeswoman, Maria Wetterstrand, has ruled out cooperation with the Moderates. However, none of the contacted regional heads excluded the possibility of collaborating with the party.

At the same time, they emphasised that the Greens would never offer party support without being able to have influence on a common policy in one way or another.

Reinfeldt said during a visit to southern Sweden in Skåne on Thursday that a vote for Green spokeswoman Maria Wetterstrand is a vote for Mona Sahlin, regardless of what the Greens’ regional leaders suggest.

“The spokespeople for the Green Party have been clear,” said Reinfeldt.

If both coalitions receive support that is appromixately the same size and the Sweden Democrats enter Sweden’s parliament, the Riksdag, Reinfeldt believes that the biggest block should govern.

“However, it will come at a high price. Uncertainty will prevail,” he said. “Those who are afraid of whether Sweden will say no to the Sweden Democrats on the whole.”