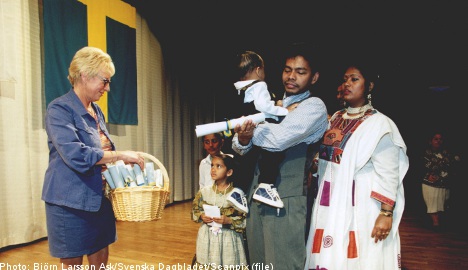 Much has been written and said about the Sweden Democrats and their relationship to immigration. Similarly interesting are the established parties’ views on migration and on people who move to Sweden.

By expressing horror at the Sweden Democrats, someone can still come across as well-intentioned even when expressing other forms of prejudice and actively reproducing constructed group characteristics.

The exotification of immigrants has become a political edifice of ideas which divides up the population and transforms it into an abstract collective suitable for clashes over group-based rights.

The emphasis on immigration is an institutional torment; as second- and third-generation and eternal immigrants, people are never afforded an individual identity, but are rather treated like demanding members of some clan in need of special treatment.

Over the past forty years or so a policy has been formulated, and an administrative system of authority developed, which is based on sympathy for those who move here.

The rest of the world considers the Swedes to be tolerant and generous, and there are obvious economic reasons for why so many people come here. Only in Sweden is this generosity perceived and portrayed as humiliating, discriminatory, and xenophobic. Only here can it be considered problematic to greet a democratic system with domestic, everyday language.

In no other country do people make so many excuses for their achievements and so easily forget that they are based on a long political struggle infused with a strong mixture of social democracy and the women’s movement.

Society’s relationship to new arrivals is shaky, inconsistent, and, in a poor sense, subject to negotiation. Emotionally-charged descriptions – the unaccompanied refugee children, the undocumented, the diffuse refugee concept, and so on – reveal an anxiety about discussing the problem, which quite a few of us will, sooner or later, be confronted with in schools, in the health system, or on the street.

Instead of admitting to the radically altered conditions in schools, for example, and around peoples’ ability to support themselves, we instead talk about social exclusion. The essence of the debate in the media is seldom about how things actually look, but rather about how they should be, and this imagined reality is then formulated into political rhetoric, journalism, and information disseminated to the public and workers.

In our ambition to be compassionate and sympathetic – good ambitions! – we’ve created a special sort of being: the more or less immature newcomer. One can still hear people speak about “our immigrants” as if they were pets or birds that one feeds in the park. A benevolent perspective permeates integration policies and gives satisfaction to those who help and want to be friendly.

But still no one has added up the costs for all the operations, activities, and projects which have been started to provide support, but there must now be so much collective experience from various attempts to help people become self-sufficient and incorporated into society that it’s now possible to explain why so many are still living on public assistance. It is that knowledge and insight which can take us forward. Most people with experience in this area can probably attest to the fact that discrimination is not the main problem.

For those of us who grew up in the left movement of the 1970s, it was natural to embrace prevailing views among journalists and sociologists and other academics regarding the well meaning principles behind caring for others, along with the emphasis on social support for individuals who were in a tough spot or found themselves at a disadvantage. We wanted to express our solidarity.

Can it be that that solidarity within the sphere of public authorities was transformed to self-reinforcing good deeds – that the more we believe that we need help, the more services that are provided – at the same time as those who seek help from society live under different conditions and values than before?

Tens of thousands of public employees spend their days dealing with integration issues, both on the micro- and macro-levels. Why then, is it so anxiety-ridden to talk about the unfortunate circumstances that actually exist? All these people sitting in meetings, participating in projects, getting paid for the work they do, going through training programmes and so on. Does it lead anywhere? Are Stockholm, Gothenburg, and Malmö less segregated cities today than they were 20 years ago?

By systematically dividing up the population, with immigrants as victims of a system created by the natives, a number of fictional clashes are created. These illusory elements are strengthened by the continuing emphasis that it’s the (media) portrayals of unacceptable conditions which are negative and not the conditions themselves.

When the new district head of Rosengård in Malmö takes up her post and says that the most important thing is to change the area’s image, there is an immediate credibility problem: why devote so many resources to the people living there when it’s just like any other place?

And is the media portrayal worse than reality? Journalism is more likely to have a tendency to seek out bright spots expressly to avoid looking prejudiced. The current crop of bosses within Sweden’s social services took part in public debates when they were younger, but social workers have since remained silent for a long time about development conditions and power structures in troubled neighbourhoods. And when teachers in Malmö started speaking on the record last spring about inadequate teaching conditions, it was a long, pent up silence which finally broke.

After the death of solidarity, we’ve ended up with inflationary goodness rooted in a middle class, which never really needs to deal with the consequences of its moralizing view of those with bad experiences and therefore the wrong views. Structural benevolence dominates. But if people don’t get jobs, it’s often not because they immigrated, but because they lack the training and competence for the job in question.

“Ill fares the land” is the title of the last book that historian Tony Judt managed to publish before he died in early August in New York of amyotrophic lateral sclerosis (ALS). It’s an educational plea for social democracy – a genuine social democracy – and a contemporary description of the left’s wandering out of the meaninglessness of identity politics. The title can also be give rise to a Swedish interpretation: “illfare” as opposed to “wellfare”; a society which gives up on notions of equality and bows to special demands and the rights of disparate groups.

With condescending tolerance and self-gratifying sophistication, a system has been created where both the takers and givers of social assistance can fully and completely assume their expected roles and in so doing ensure that nothing changes.

Editor’s Note:This article was first published in Swedish in the Dagens Nyheter newspaper on September 1st, 2010.