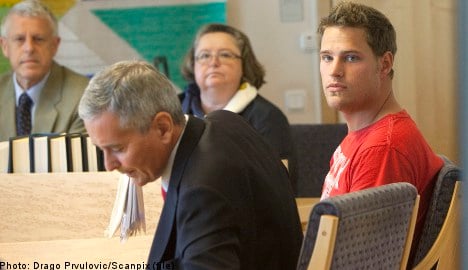 Laughs and shoves escalated into a brawl that resulted in the couple losing their lives at the Hovs Hallar nature reserve northwest of Båstad on Sweden’s southwestern coast.

“It was a pure impulse thing,” the suspect, identified as Joakim Ericsson in tabloids Expressen and Aftonbladet, said during questioning in Helsingborg district court on Friday.

Ericsson is on trial for murder and dismemberment of Sölve Svensson, 64, and Irene Saldert, 58.

The couple were last seen alive at their home in Båstad in mid-January 2007. Ericsson has been charged with murder and disturbing the peace of the dead, but he claims the murder of Svensson was in self-defence.

This is the second time Ericsson has been on trial for charges related to the couple’s disappearance, having first been arrested in March 2007 on suspicion of fraud after he sold the couple’s car and took out large loans in Svensson’s name.

Police later extended their suspicions to kidnapping and murder. But, in part because the bodies and Svensson and Saldert had not yet been found, Ericsson was cleared of the murder charges and sentenced to one year in prison for fraud.

But prosecutors were granted a new trial after the couple’s mutilated and dismembered bodies were found in May 2008 in Häljasjön lake near Veberöd, 140 km southwest of Hovs Hallar, in an area familiar to Ericsson.

Ericsson said that his memories of the killings are hazy. He said that he was invited to dinner at the home of Svensson and his partner. During a walk on the beach, Ericsson lost his car keys, but that Svensson then agreed to help find them.

He said that he happened to laugh when Svensson slipped on the rocky shore in his wooden clogs. The older man became angry.

“Then he shoved me with his arm. I took it in the stomach area,” Ericsson said, adding that he later shoved back because he was irritated.

“When I shoved into him, he became mad as hell. I called him ‘stupid bastard.’ There were harsh words and curses, but nothing I remember,” Ericsson said, adding that he received several hard blows to the head from the shaft of Svensson’s flashlight.

Ericsson had extreme difficulty recalling the blows and injuries. The prosecution pointed out that since Svensson was an older man, Ericsson was physically stronger. However, Ericsson responded that Svensson was not weak and was as tall as himself, standing at 1.9 metres.

Prosecutor Göran Olsson wondered why the row became so heated as Ericsson straddled Svensson and why he did not choose to run away.

“He was beating me with this flashlight,” Ericsson replied, according to the Expressen newspaper.

Olsson also asked why Ericsson used a rock to strike Svensson’s head, again when he simply could have chosen to run away.

“It was a purely impulsive act,” he said.

“It was the adrenaline and anger.”

In addition, Olsson and fellow prosecutor Anna Broomé questioned Ericsson as to why he went as far as knocking Svensson down.

The 24-year-old suspect gave the same monotonous answers to all the questions in a quiet voice.

He did not remember details, had faint memories, and was filled with adrenaline and anger.

Ericsson said felt so threatened, he did not think clearly and even beat Saldert, who grabbed the back of his jacket.

He then calmly recalled the panic he felt when he realized he had just killed two people.

“I realized I’d have to move them,” said Ericsson, according to Aftonbladet.

“The right thing to do would have been to call the police.”

But instead of calling the police, Ericsson instead went to Svensson’s cabin where he found tools he could use to cut up the bodies so he could more easily carry them from the beach and load them into the back of the car.

“I wanted to hide my involvement,” he said, according to Expressen.

“It was a decision I made when I was completely panic-stricken.”

He then drove home and contemplated what to do with the dismembered bodies, eventually deciding to dump them in Häljasjön lake.

Ericsson then borrowed his father’s car, rented a trailer, and stole a boat in Landskrona before making his way to the lake.

After experimenting with different methods to weigh down the bodies and being forced to call a tow truck to help him dislodge the trailer, which had become stuck, he managed to dump the bodies.

The following day Ericsson returned to Häljasjön lake to see if anything had floated up to the surface.

He then drove to the harbour in Landskrona with Svensson’s car and dumped the tools he’d used to cut up the bodies.

Despite the tough questioning faced by Ericsson, his attorney Lars Tindberg was satisfied with the day’s proceedings.

“I think a lot more is coming out. We’re going to claim he acted in self-defence,” he told Aftonbladet.

The trial resumes on September 16th.