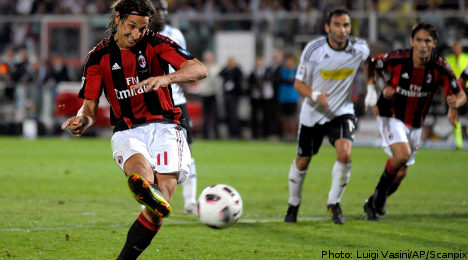 Ibrahimovic was favoured up front in a trio including Brazilian pair Ronaldinho and Pato, with Robinho on the bench.

Cesena, who are playing their first season in Serie A for 19 years, however shocked the Milanese by going in 2-0 up at the break.

Despite some improvement in the second half after switching Robinho for Ronaldinho, AC Milan struggle to pose any real threat to the Cesena goal until Ibrahimovic’s penalty miss in the 86nd minute.

“If we don’t play as a team then we won’t win the important things,” he said, adding that he hoped the result would serve as a wake up call for his team.

Club chairman Silvio Berlusconi was also annoyed after the match, but directed his ire at the referee instead of his players.

“You have to have patience, these things happen in football, but I think that the referee robbed us of three goals,” the Italian prime minister said.