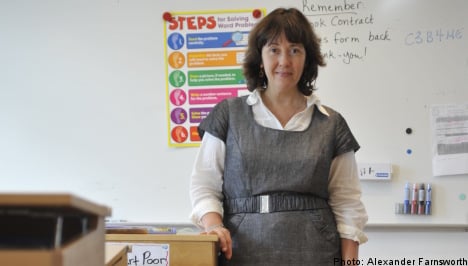 Stockholm school teacher Aimee Lambert Poor won’t have much trouble deciding what to wear this week. In fact, she won’t have to waste any time looking in her wardrobe during all of September, and most of the following month. Aimee has resolved to wear the same dress for 50 days, as a means of raising funds for homeless people.

Members of her family, friends and a number of her colleagues at Engelska Skolan Norr in Stockholm have agreed to sponsor her, some promising to give a few kronor per day to the charity for the entire 50-day period, and there have been other gestures of support.

“One of my fellow teachers said she will wear the same shirt for almost a week as a show of solidarity. Another promised to wear the same socks for 50 days, but I don’t believe him,” Aimee says with a laugh.

The fact that up to 5,000 people in Stockholm are homeless has prompted Boston native Lambert Poor to launch the unusual fundraising drive to support the disadvantaged.

Lambert Poor, who works as a fourth grade school teacher at the bilingual public school, has vowed to wear only one dress until October 20th.

The money she raises through sponsorships will go to Föreningen Ny Gemenskap (New Community Association), which provides housing, food and cultural activities for the homeless.

“We are naturally very glad when someone wants to help us,” said Ny Gemenskap manager Anna Malmqvist, when asked to comment upon the One Dress: 50 days project.

Approximately 200 people come to the organization’s shelter every day, most of whom are homeless; many have problems with drugs or alcohol.

The school teacher’s only dress for the seven-week period is a simple, grey Calvin Klein number she bought for 38 dollars at discount retailer Marshalls in Bedford, Massachusetts.

Lambert Poor grew up on Commonwealth Avenue in Boston, one of the town’s main thoroughfares, and graduated from nearby Wheaton College in 1984. Since then she has lived abroad for 25 years — in Japan, the UK, and Sweden.

The long-time expatriate sees her plan to wear the same dress for an extended period as an opportunity to explore her own feelings about fashion.

“I am very interested in clothes. You could even call it an obsession. I love to go shopping,” she explains.

When and if her dress-as-uniform gets dirty, Aimee plans to wash it in her sink at home.

“I suppose I can dry it at night with my hairdryer,” she adds.

She also hopes that it will take her less time to get ready for work in the morning, now that the choice of what to wear has already been made.

Lambert Poor sometimes feels that she owns too many things. Thus she also sees her one-dress-for-50-days project as an exercise in using less.

How did her husband react to the news that his wife would be wearing the same dress for 50 consecutive days?

“He was moderately enthusiastic,” Lambert Poor replies with a smile.