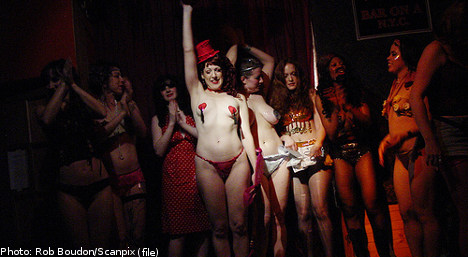 The stripper, who performs under the stage name Miss Cookie, is reported to have stripped down to all but her panties – with the party’s logo disguising her nipples.

But the show, entitled “Rock the arse off the right”, did not please everyone in attendance with several leaving in protest. The choice of entertainment was however defended by Södertälje councillor Staffan Norberg.

“As burlesque and circus and cabaret, which I think it was marketed as, I think it is okay,” he said.

Norberg interpreted the theme of the performance as an interpretation of the right’s superficiality falling away to reveal only the Left’s core.

“I thought that there was a political message,” Norberg said adding, “but broadly, naturally.”

Despite the Left Party’s high profile as a feminist party, Norberg remained unrepentant.

“If you don’t like burlesque and lack a sense of humour and satire then this was not the right place to be,” he said.

According to local media reports there were families with children in attendance. Several people are reported to have left during the strip show – but Norberg refuted the information. He underlined that there was also a half-naked man on stage.

“He juggled with knives and ate an apple at the same time, to great amusement among the audience,” he said.

According to the Dagens Nyheter (DN), Miss Cookie is unperturbed by the attention, arguing that her act should be considered “burlesque with an element of humour” and not “striptease”.

“I think that a woman has the right to use her body for humour. There was also a man in the show who stripped down to reveal a naked upper-body and was thus more naked than I, but no one is upset about that,” she said to DN.