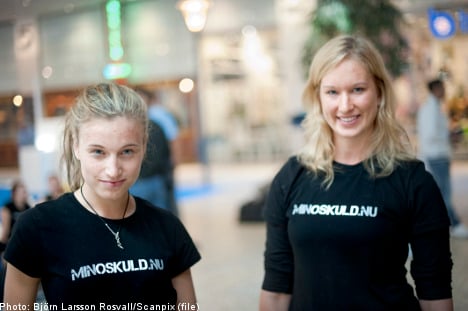 Education policy, quality of schools, and youth unemployment have been hot-button issues in the tight race between the ruling centre-right alliance and the “red-green” opposition, made up of the Social Democrat, Green, and formerly communist Left parties.

“The main problem for the parties is that young voters tend to swing so fast from the left to the right from one month to another,” Henrik Brors, an analyst with daily Dagens Nyheter (DN), tells AFP about efforts to woo the some 500,000 first time voters.

The Social Democrats, which lead the opposition coalition, have made a particular effort to conquer the younger generation, running TV and newspaper ads focusing on youth unemployment.

The party vowed to finance some 100,000 new jobs, internships and training places to help young adults enter the labour market.

Despite the official unemployment rate for those aged 15 to 24 hitting 25 percent last year, Brors says the campaign strategy has not resulted in much of a gain for the Social Democrats.

That might be because youth unemployment, regardless of the fact that it is a “huge problem,” has taken up very little space in this year’s campaign, says sociologist Stefan Svallfors of Umeå University.

“This election has instead revolved around very peripheral issues, like school discipline and head scarves,” he tells AFP.

Someone who has won ground by pushing such issues is Education Minister Jan Björklund, whose Liberal Party has jumped several points in the polls after he began calling for a ban on face-covering veils in schools, and urging disciplinary measures such as forcing parents of troubled children to come to school with them.

With Björklund in the lead, the centre-right coalition is pushing to begin grading children two years earlier than now, starting in the sixth grade, or at around age 11.

The proposal has proved so popular that the leftwing opposition has found itself bartering over which year grading should begin, before finally agreeing on the seventh grade.

The Left Party’s pet issue that children should not be graded at all has been left by the wayside.

With both sides agreeing grading should begin earlier, with only a year separating the two proposals, the issue is no longer central in swaying voters, says Sören Holmberg, a political science professor at Gothenburg University.

However, “the schools question in general has been beneficiary to the (governing) alliance,” he tells AFP.

For young people just out of school however the opposition seems to be the favorite, a recent poll of voters aged 18 to 24 showed.

But observers point out it is not the Social Democrats and their job promises that have swelled the opposition ranks, but rather the Green Party.

In the recent survey, the party scored 16 percent among the youngest voters, while it hovers below 10 percent in the general population.

The question of Sweden’s so-called “free schools” (friskolor) has also taken up a lot of space in the education debate.

Introduced under a centre-right government in the early 90s, the charter-like schools, which are privately run but publicly funded, have become increasingly popular in Sweden.

The schools generally follow a similar curriculum as the public schools, but have more liberty to emphasise certain subjects, to address the needs of certain religious or national groups and to use different pedagogical approaches.

Proponents of the system argue they offer more choice and variety to parents and students, while critics say they increase disparities.

The fact that the tax-financed schools are permitted to make a profit for their private shareholders has also given rise to heated debate.

The government has argued the prospect of turning a profit helps schools improve performance.

The opposition bloc meanwhile is split on the issue, with the Greens toeing the government line, the Social Democrats agreeing to profits but with more regulation and the Left Party staunchly against the concept.

Despite schooling being central to this year’s campaign, the differences between the blocs on education are minor, the president of the Swedish Teachers’ Union, Eva-Lis Siren, told daily Svenska Dagbladet (SvD) recently.

“The differences between the blocs have definitely decreased,” she said.

“We see it in the grades issue but also in the fact that we are now having a very important debate on how to get to a better quality of schools.”