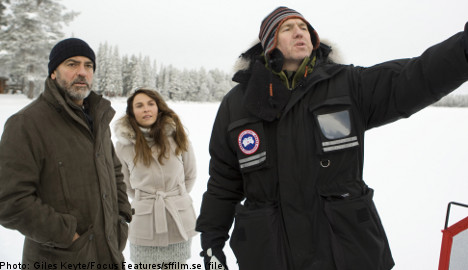 According to the film’s script, the scenes instead play out in the central Swedish county of Dalarna.

“Send them my regards and apologies,” Clooney told the Nöjesbladet daily.

“The American” is directed by Dutch director Anton Corbijn and tells the story of Jack (Clooney), a master assassin who after a harsh experience in Sweden, decides he is ready for the quiet life in rural Italy.

The early scenes of the film were filmed in Singsjön outside of the village of Brunflo in Jämtland, a county located geographically in the centre of Sweden and resting on the Norwegian border.

However when the “The American” premièred, the province of Dalarna was named as the location in the early scenes in the film, much to the chagrin of the famously patriotic Jämtlanders.

The reason for the switch was not however the result of a geographical mix up but was done for the more perfunctory reason that it suited the plot better, as Dalarna is within three hours drive of the Swedish capital Stockholm.

Still, whether Dalarna or Jämtland, the wintry scenes in Sweden’s fells left their mark on Clooney, who divides his time between homes in Los Angeles and Lake Como, Italy.

“It was the coldest week of my life,” he told Nöjesbladet adding, as if to underline the point, “it was terribly cold”.

While Clooney told the newspaper of the difficulty of filming in such bracing conditions, and with only four hours of daylight in the Swedish mid-winter, he did have something nice to say about Jämtland.

“It was fantastically beautiful.”

Clooney explained that despite the long dark nights he found that he was able to make good use of his freetime in the county’s capital of Östersund, home to some 44,000 people.

“I used the dark hours to read the manuscript and catch up on all the films I had missed on DVD. There was a lot of time spent in the hotel room,” he told Nöjesbladet.

Jämtland has the distinction of being its own unofficial republic within the kingdom of Sweden. The republic was founded in 1963 as a reaction to emigration from the county and is essentially a marketing project to boost local pride.

The Republic of Jämtland, which comes complete with its own flag, language and President, is backed up by the, somewhat tongue-in-cheek, Liberation Movement. The rebublic celebrates its existence with three festivals each year – National Day on March 12th, the Storsjöyran Freedom Festival in July, and the start of the elk hunting season in September.

Needless to say the proud people of Jämtland were none too happy with the mix-up with southerly neighbours Dalarna, and when George Clooney was informed by Nöjesbladet that feelings were running high in the republic, he expressed remorse for the slight.

“I didn’t even know we had changed it. Send them my regards and my apologies. I am very sorry about that.”