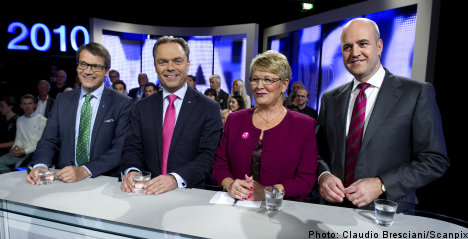 Support for the centre-left Red-Green coalition came in at 40.9 percent, according to the poll, carried out by Synovate and published in the Dagens Nyheter (DN) newspaper.

The Sweden Democrats saw their support go from 6 percent last week to 7.5 percent, the party’s highest level of support so far in a Synovate poll.

“Future surveys will determine if this is a randomly high result, but with a margin of error of 1.5 percent upwards and downwards, the Sweden Democrats are now between 6 and 9 percent,” Synovate analyst Nicklas Källebring told DN.

The results indicate that the Sweden Democrats are heading toward the Riksdag.

Källebring added that the Sweden Democrats appear to have gained ground among male voters under 30 with lower paying jobs who live in eastern and southern Sweden.

He added that the party has won over voters who traditionally identify with the Social Democrats, but have instead decided to mark their frustration over immigration policy now that they feel a shift in power in the Riksdag is unlikely.

And if the Synovate results correspond to the actual election results, the Sweden Democrats would find themselves with 27 seats in the parliament, making them the third largest party after the Moderates and the Social Democrats.

But the difference between the two main party blocs is large enough that the Sweden Democrats would still not hold the balance of power.

According to the Synovate poll, the Moderates remain the largest party, with 30.5 percent of voter support, followed by the Social Democrats with 28.5 percent.

Green Party support comes in at 7.2 percent, while support for the Left Party fell to 5.2 percent, a statistically significant decrease from the 7.5 percent the party received a few weeks ago.

The poll also indicates that none of the three smaller parties that make up the Alliance appear in danger of missing the 4 percent threshold to gain seats in the Riksdag, with the Liberal Party at 7.2 percent, the Centre Party at 6.2 percent, and the Christian Democrats at 5.7 percent.

The number of uncertain voters remains high, however, with 17.5 percent of those polled indicating they had not yet made up their minds.