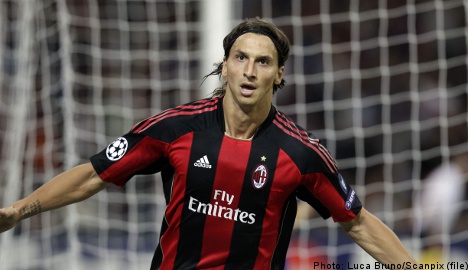 Milan started lethargically in opening stages of the match at the San Siro but after a double switch in the second half kicked started the Rossoneri and gave Ibrahimovic the platform to put the game beyond the French team.

Kevin Prince-Boateng and Robinho took the place of Ambrosini and Pato and were able to provide the service that the tall Swede had been demanding, and in three second-half minutes came the two goal reward.

A flicked header from Boateng set up Ibrahimovic for his first goal in a Milan shirt in the 66th minute, followed by a sublime pass from Brazilian Ronaldinho in the 69th gave the Malmö-born forward the chance to double the lead.

The goals appeared to take the tension out of Milan’s play and the team began attacking with a fluency patently absent in the first hour of the must-win match.

With Ajax and Real Madrid to come in Milan’s Champions League group, the win against Auxerre was a requirement and one that the Rossoneri will be relieved and happy to have in the bag.

But despite having completed a solid evening’s work, Milan’s Swedish star found himself embroiled in an ugly bust up with legendary former Milan and Italy coach Arigo Sacchi.

Sacchi, who won two European Cups and a Serie A title with Milan and guided Italy to the 1994 World Cup final, was a guest on Mediaset Premium’s post-match programme and had joked that if it wasn’t for Ibrahimovic’s big feet – European size 47s – he wouldn’t have scored the first goal.

“Sacchi needs to learn how to shut up,” he fired back about the 64-year-old Italian great, causing shock in the TV studio.

“He also seems jealous because he’s talking too much, he needs to talk less about me on TV and in the newspapers.”

“If he wants something he can come and see me about it. If you don’t like the way I play, don’t come and watch me.”

That sparked an on-air argument between the pair as the presenter initially tried to explain that it wasn’t a criticism.

“He also said things about me when I was at Barcelona,” retorted Ibrahimovic.

“I believe I can express my opinion in a polite and correct way, I don’t believe I’ve offended you,” said Sacchi.

“When someone talks too much, they talk too much, you’re one of those people. If you don’t like the way I play, don’t come and watch me,” said Ibrahimovic.

“You don’t need to explain anything to me,” spat Ibrahimovic.

“You need to learn some manners, son,” concluded Sacchi.