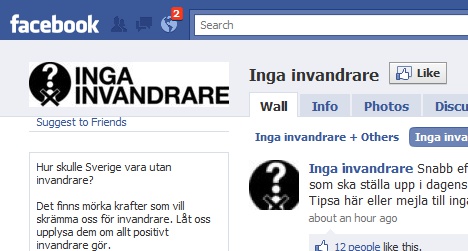 Rasti has opened a Facebook page entitled “Inga Invandrare” (No immigrants) in a call to Swedes with an immigrant background to protest against “dark forces that want to scare us about immigrants.”

“I want to remind Sweden of all the good things that immigrants contribute with. That we are more than just thieves, rapists and trouble-makers,” Rasti told the Aftonbladet daily.

Rasti decided to act as opinion polls ahead of the September 19th general election started to indicate that the anti-immigrant Sweden Democrats might claim seats in parliament.

Rusti drawed parallels with the 1991 election, when Ny Demokrati gained seats in parliament on an anti-immigrant ticket as well as the so-called Laserman killings of immigrants in Sweden.

The campaign is designed to take a stand against what Rusti, and the now 25,000 members of the Inga Invandrare Facebook page, as “vibes of 1991” and underline just how much poorer Sweden would be without its cultural and ethnic diversity.

“Most of us our normal people, pay tax, contribute with culture, drive busses, do whatever,” he told the newspaper.

Any “ethnic Swedes” that wish to take part in a supporting capacity are also welcome, Rusti confirmed, adding that in reality dividing the society into two groups is the last of his intentions.