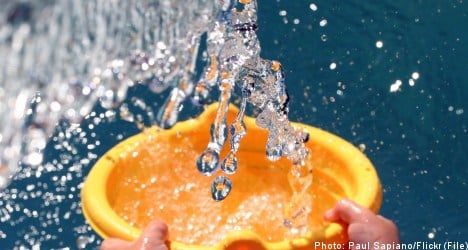 The charges stem from an incident which took place on an unusually warm August night, the local Blekinge Läns Tidning (BLT) newspaper reports.

Unable to sleep due to the lingering late-evening heat, the 83-year-old went to open a window, hoping for some relief.

Instead he was enveloped by a cloud of cigarette smoke which billowed up from the balcony below and proceeded to waft into his bedroom.

Angered by the unexpected fog of second-hand smoke, the 83-year-old was determined to extinguish his neighbour’s cigarette by any means necessary.

“I went and fetched a bucket from the closet and filled it with water. Yeah, then the cigarette was put out,” the 83-year-old to BLT.

“Why should a tenant need to put up with behaviour like that from a neighbour…I’m an old man with allergies and get sick from cigarette smoke. This is my bedroom. It’s outrageous to not be able to breathe fresh air here.”

According to the neighbour, the 83-year-old yelled at her to put our her cigarette or risk being reported to the police. And no sooner had she heard the man’s threat, she found herself soaked from head to toe.

But the drenched and nicotine-dependent neighbour didn’t take the matter lying down and instead filed her own report to the police.

She claimed that the old man’s soggy assault wasn’t a spontaneous act of frustration, but rather a calculated and premeditated attack.

She also fears that she may have suffered an injury as a result of getting soaked by the 83-year-old.

“It hurt a lot when the water hit my head,” she told BLT, adding she intends to seek medical help for the pain.