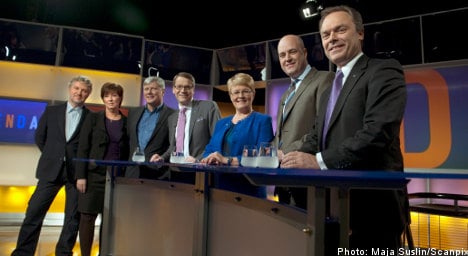 The contest, which traditionally brings an end to the string of televised debates leading up to the election, is being taken very seriously by the parties, with a large number of the expected one million strong television audience reported to remain undecided.

The latest surveys indicate that 10-20 percent of the 7.1 million strong Swedish electorate have not yet made their choice, corresponding to as many as 1.4 million people.

A Sifo survey from last week indicated that not only are a large number of voters uncertain about which party to plump for, up to 1.2 million could consider switching political blocs.

Party leaders from all seven parliamentary parties will take part in the debate.

“There are large groups of people who have not made up their minds. They are going to try to find something to believe in. That is how our democracy works, in that we believe in the possibilities of politics in comparison to other countries. That is something I am proud of.”

In response to the question over which is the most important issue to be discussed in this evening’s debate, Reinfeldt replied:

The anti-immigrant Sweden Democrats have meanwhile announced that party leader Jimmie Åkesson will hold his own debate in protest at being excluded from mainstream politics, according to a statement from the party.

The party plans to install a temporary television studio a few hundred metres from the SVT headquarters. There Åkesson will be able to follow the debate on a big screen and issue his own view on comments in the live broadcast.