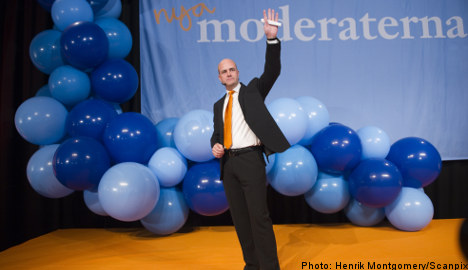 “The Moderate Party has won its strongest results since the right to vote was introduced,” Reinfeldt exulted as a tally of 5,662 of Sweden’s 5,668 electoral districts handed his party 30 percent of the vote.

“We have received broad support tonight,” he said, pointing out that the party had doubled its support since winning just 15 percent of the vote in 2002.

His centre-right coalition, which includes the Liberal, Centre and Christian Democrat parties, meanwhile secured 49.3 percent of the vote, or 172 of the 349 seats in parliament.

The coalition got the most votes in a hung parliament, where the far-right Sweden Democrats is expected to hold a key position and could play kingmaker.

“This is not the election result we had hoped for,” Reinfeldt said, referring to the Sweden Democrats’ entry into parliament for the first time, with 5.7 percent of the vote representing 20 seats.

“I have been clear…We will not cooperate with or be made dependent on the Sweden Democrats,” he said, adding that he planned to turn to the Green Party, part of the opposition coalition, to seek broader parliamentary support.

Reinfeldt’s first place finish spelled a decisive end to the rival Social Democrats’ 80-year domination of Swedish politics and their role as caretakers of the country’s famous cradle-to-grave welfare state.

That party saw its support shrink to just 30.9 percent in Sunday’s election, according to the near-final results, down from 35.3 percent in 2006, when its score was already one of its weakest on record.

The left-wing opposition coalition, made up of the Social Democrats and the Green and Left Parties, together garnered 43.7 percent of the vote, or 157 seats in parliament.