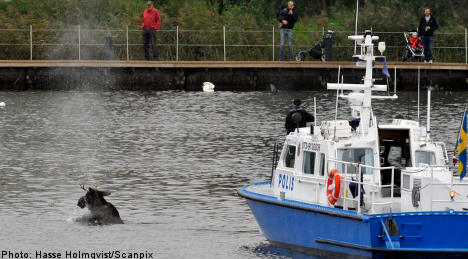 “We tried to get it out for several hours,” said Ulf Lindgren of the Stockholm police.

The elk was first spotted in the early hours of Monday in the allotments on the south side of densely populated Södermalm.

When police gave chase the wild animal fled and after having evaded capture in the streets of Stockholm, jumped into the cool waters of Lake Hammarby and began swimming towards the residential area of Hammarby Sjöstad.

The elk however became increasingly stressed by the situation and despite managing to climb up on to dry land, promptly hopped back into the water.

The police continued their attempts to encourage the elk to climb back out of the water by its own volition but by 10am efforts had proved fruitless. The decision was then taken to call the Stockholm game warden who killed the animal.

“We couldn’t get it out and it became more and more stressed. At first we hoped that it would be able to get out by itself but unfortunately it didn’t find a way out,” said Ulf Lindgren.

After having been shot the deceased elk was towed into land.