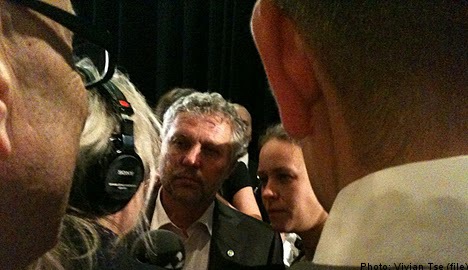 A survey carried out by Sifo and published on Tuesday in the Aftonbladet newspaper revealed that a majority of Green Party voters, 53 percent, were against cooperating with the Alliance, while 34 percent were in favour of the idea.

The reticence among Green voters toward working with the parties on the right came as no surprise to Cheryl Jones Fur, the party’s spokesperson for Kronoberg county.

“The people who voted for us don’t want us to switch sides,” she told The Local.

“Our entire election campaign was directed toward changing the government.”

She added that the uncertain election results have put the Green Party in a difficult position.

“The rhetoric of the party leaders has put a lot of pressure on the Green Party. It’s like if we make the wrong decision everything will be our fault,” she said.

“I’m not sure we’re being treated fairly.”

But when it comes to working with the Alliance, Jones Fur acknowledged that there was scope for cooperation.

“The Greens do have lots in common with the Alliance, like our policies toward small business, for example,” she said.

When asked about what sort of price the Green Party might extract in exchange for a pledge to work with the Alliance, Jones Fur stressed the importance of environmental issues as well as policies to reduce divisions in society.

“These issues can’t be ignored in negotiations,” she said.

“There’s nothing wrong with the Green Party’s engagement on environmental issues. So I think that (including them) can only add strength,” she told the Expressen newspaper.

While Olofsson agreed with Reinfledt about turning to the Greens in order to avoid having to work with the Sweden Democrats, she refused to divulge how such an approach might come about.

Also complicating the possibility of joining an Alliance government, according to Jones Fur, are the many issues where the Green differ from the other centre-right parties, such as Sweden’s military engagement in Afghanistan.

“Even if we got the environment minister post and the deputy prime minister post, it would be hard (to be a part of centre-right government) because you have to support the entire government and all of its positions,” she said.

According to political science professor Ulf Bjereld, the Alliance could adjust its policies in a way that would allow the Greens and their centre-left coalition partners to support them.

“The government could also choose to forge ahead, lose a number of votes and get through some of their proposals with the help of the Sweden Democrats,” Bjereld told the TT news agency.

But he cautioned that issues would likely arise which could cause the government to fall.

“Repeated defeats on specific issues can also erode the government’s credibility and lead to a new election. But the Red-Greens would also hesitate to topple an Alliance government with help of the Sweden Democrats,” Bjereld said.

However, the future of Red-Green cooperation remains in doubt following the three-party coalition’s unsuccessful bid to unseat the Alliance.

“But this would be a natural breaking point,” said Jones Fur, adding that the Greens are “reconsidering the coalition”.

“To be honest, I just don’t know what the future will be. We’re sticking together right now, but we’re certainly reevaluating how to move forward as a coalition and as separate parties.”