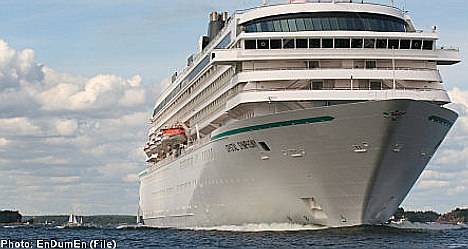 Each summer hundreds of ships cruise around the northern European sea, with

clean up its act, and despite access to proper disposal services.

“There’s no real law telling them that they can’t do that. The legislation is missing,” WWF marine expert Vanessa Kloetzer told AFP.

The WWF says that Helsinki and Stockholm meet these requirements, even though Kloetzer said there may still be some issues to address in Helsinki.

“In 2010, a total of 240 ships visited Stockholm, and of these only 115 used the port’s services and some of the 115 ships only removed a small amount of waste water,” WWF said in a press release.

The WWF also quotes data from Helsinki’s main port which shows that only 66 percent of ships used the port’s free waste disposal service.

Kloetzer said ships may opt not to take advantage of the free service because it’s simply faster to dump waste into the sea.

“All of our members have made a commitment to voluntarily discharge black water ashore where there are proper facilities,” said the ECC’s environmental spokesman Robert Ashdown.

“It’s more likely the case that the ships that aren’t using the services aren’t ECC members, or they have facilities to store waste until they reach another port,” he said.

The WWF calculates that around 350 cruise ships ply the Baltic in the summer, resulting in 18 tonnes of phosphorous and 74 tonnes of nitrogen polluting the water via sewage.

“This is a small percentage of total pollution in the Baltic, but it can have a localised effect by increasing algae bloom and it can contain harmful bacteria,” Kloetzer said.