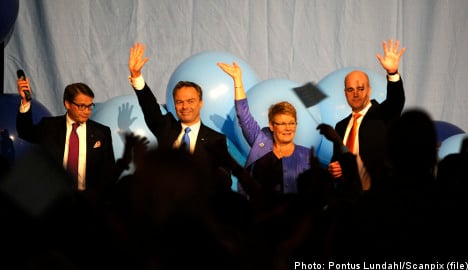 On Thursday afternoon the Swedish Election Authority (Valmyndigheten) announced that results from all of the country’s 6,063 election districts had been counted twice and delivered to the agency.

According to the final results, the Social Democrats ended up with 30.69 percent of the votes, while the Moderates received 30.03 percent.

The Election Authority also announced the final distribution of seats in the Riksdag, with the Alliance ending up with 173 seats, two shy of the 175 needed for an absolute majority.

Meanwhile, the Red-Green coalition received 156 seats, while the Sweden Democrats received 20 seats, according to the agency’s final tally.

Taken together, the four Alliance parties received a total of 2,936,142 votes and the three parties of the Red-Green coalition received 2,598,096, while the Sweden Democrats had a total of 339,566 votes.

Together, the Red-Green coalition and the Sweden Democrats ended up with 1,922 more votes than the four parties of the centre-right Alliance.

But before the ink on the announcement had time to try, there was a report that a complaint had been filed by a single individual contesting the election results. The complainant claims that the proportions between the votes received and the distribution of seats is faulty.

“We have received a complaint in which someone believes there is a conflict with the principle for how things should be and the results of an election should be,” said Nina Pripp, substitute chair of the Election Review Board (Valprövningsnämnden) to the TT news agency.

The current system is unfavourable to smaller parties, especially when looking at how the number of votes are divided into parliamentary seats.

For the largest party, the Social Democrats, each parliamentary seat translates into 16,270 votes. But for the smaller Christian Democrats, each seat in the Riksdag requires 17,521 votes, a difference of 1,251 votes.

However, with the margins so close in Gothenburg and Värmland, there is a high probability that the results will be appealed to the Election Review Board, which wouldn’t make a final ruling until November.

In the mean time, the work of the newly elected Riksdag would begin, but be overshadowed by the prospect of a possible redistribution of seats.

The Election Review Board can call for a new election in a district if it determines that problems affect the outcome, something that Kalle Björkling of the Swedish Election Authority doesn’t believe has ever happened before following a Swedish Riksdag vote.

“Nothing has changes since election night. As things are now, internal work with how to build a government awaits,” she said.

Alenius added that she had no information about possible contacts between the Reinfeldt and the Green Party about seeking the latter’s cooperation.

“He’s not going to negotiate through the media,” she told SvD.