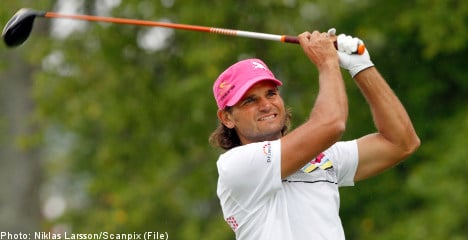 The masterful round by Edfors left Ryder Cup star Padraig Harrington seven shots off the pace.

The Swede’s round of 11 under par included 10 birdies, an eagle and just one bogey, gave him a two-shot lead over England’s David Dixon with France’s Jean-Francois Remesy and John Parry of England in a share of third place, three shots off the lead.

Harrington, playing in his final event before next week’s Ryder Cup clash with the USA, hit a 68, to be four under par.

Edfors, a former British Masters and Scottish Open champion, said he even thought a 59 might have been on the cards.

“So felt a little bit better but had a really good chance for a 59 there, I was playing really nice.

“I really felt that I had a good chance there. I was stroking the putter really good, but unfortunately three-putted 14.”

Dixon also produced his lowest European Tour round to boost his hopes of hanging onto his tour card for next season.

“I’ve been driving it great, hitting the driver really good and putting myself right up by the greens,” said 33-year-old Dixon.

Parry admitted he had the elusive 59 on his mind at one stage.

“I birdied the first, I had a good putt, I bogeyed the second, and then I had four in a row where I really didn’t really hole any, like I was hitting it to three foot and stuff and stopping it, so it was nice,” said Parry.

“I think I got it eight under through 12, so I was looking at a good chance of 59. Then I missed a birdie putt on the par five, so that stopped the momentum – I think I parred through the par fives, which if anything to be disappointed about, that was it.”