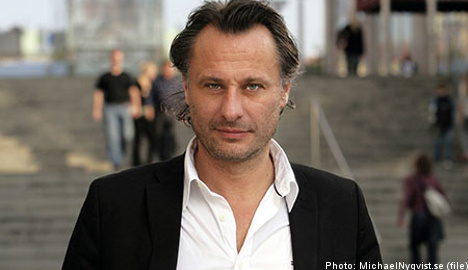 “I like Tom Cruise. He is really nice. We have a sort of connection that makes it good to work together,” he told news agency TT Spektra by phone on location in Prague.

Nyqvist completed filming in the United States earlier this week for his role in the upcoming Hollywood thriller “Abduction” starring Sigourney Weaver and Denzel Washington.

Nyqvist is not yet officially attached to the MI:4 project, in which he will play the villain.

“I cannot confirm anything right now,” Nyqvist’s agent Aleksandra Mandic told The Local on Friday in response to the TT Spektra report.

After only one day in Sweden, Nyqvist flew to Prague, where production started this week, according to TT Spektra.

“We are shooting here and in the US and in Dubai, although there will obviously be break periods in the middle.”

“I am undergoing kickboxing training every day,” he said.

“In the end, Tom Cruise and I have a fight that will take three to four weeks to film. There will be stunts where we hang from ropes and such.”

In addition to Swedish and English, Nyqvist, who is currently based in Paris, is open to taking on roles in other languages. Earlier this year, he starred in a German-language co-production of “The Chinese Man” based on Swedish author Henning Mankell’s novel “The Man from Beijing.”

However, he has not abandoned appearances Swedish and Nordic productions, in addition to multilingual European collaborations.

Nyqvist is the latest Swedish star to gain international attention while maintaining ties to projects in Sweden and the Nordic region. Alexander Skarsgård stars in the hit HBO show True Blood and recently snagged the lead role in action film “Battleship.”

However, he has also recently starred alongside father Stellan Skarsgård in both Danish director Lars von Trier’s latest work, “Melancholia,” which was filmed in western Sweden’s Trollhättan, and the Finnish animation “Moomins and the Comet Chase,” to which father and son lent their voices to the lead roles in English.