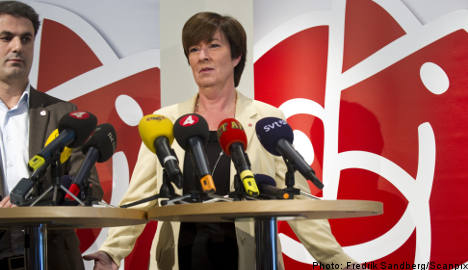 At a party executive meeting on Wednesday, top Social Democrats discussed the need to hold an extraordinary congress before the next scheduled one in 2013. Party leader Mona Sahlin said no, pointing out that the Trustee Council will convene in December, according to news agency TT’s sources.

However, at a press conference following the meeting, Sahlin did not rule out holding an extraordinary congress.

Party Secretary Ibrahim Baylan would not comment on the recommendation.

“It would be out of place for me to quote or refer to the executive committee’s discussions,” he told TT.

Baylan said that the party often holds congresses and that it would not be out of the ordinary if there were an extra congress.

The party’s crisis commission’s timetable may dictate when the congress will take place, Baylan said. The commission’s role is to analyse the party’s policies.

“That is what we are discussing, when we will hold it so that we have enough time to put together the work and the proposals for action from the commission’s conclusions,” he says.

On Wednesday, a supporting argument came up for the extraordinary congress, suggesting that Sahlin and Red-Green cooperation may need a congress decision to back them up after their stinging election defeat.

However, at the same time, Social Democrats are aware that an extraordinary congress could kick start a debate about who should lead the party.

According to Ulf Bjereld, a Social Democrat and professor of political science at Gothenburg University, it is likely that party members need to check in with each other after the crisis commission’s report.

“If the crisis commission’s findings have the possibility of becoming concrete policies, they may not be enough time with only the regular congress,” he said.

Sahlin did not comment on the issue on Friday night.

The Social Democrats have regular congresses the year before every election. When government terms were extended from three to four years in 1994, the party introduced the Trustee Council, which can convene between the annual congresses. However, it cannot decide on new party leadership.