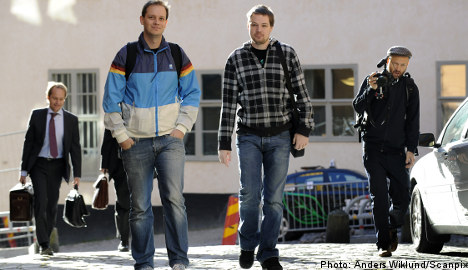 Tuesday’s proceedings began with some confusion when one of the four men behind the file sharing website The Pirate Bay, Gottfrid Svartholm Warg,failed to turn up.

Fellow defendant Peter Sunde was at first unable to shed much light on Svartholm Warg’s whereabouts.

“I don’t know. But the last time I heard from him he was sick in hospital, a couple of weeks ago.”

In response to a question over which country Svartholm Warg is currently located, Sunde replied:

“I just got a text message from his mom. It says that Gottfrid is sick and still in Cambodia. His mom is traveling there to help him,” he told the Aftonbladet newspaper.

Svartholm Warg, Sunde, as well as Fredrik Neij and Carl Lundström were all convicted in April 2009 on charges of being accessories to copyright violations.

Court proceedings began at 10am at the Svea Court of Appeal on Riddarholmen in Stockholm.

Most of the day’s hearing consisted of a review the charges against the four men, as well as presenting information about the workings of the site and the associated BitTorrent technology, according to an account of the proceedings published on the website of the Svenska Dagbladet (SvD) newspaper.

Sunde was hopeful when he arrived at the court and believes that there is a good chance that he will be acquitted.

He argued that his prospects have been improved by the fact that the court of appeal deploys more judges in its hearings, as opposed to the district court which is made up of laymen.

The atmosphere outside of the court was reported to be calm and reserved, in stark contrast to the carnival atmosphere and media scrum that greeted the district court trial of the four men.

“This is a performance with three acts, where the first was important and interesting, but the middle act is perhaps less exciting,” said Pirate Party leader Rick Falkvinge who was on site to blog from the courtroom.

The four defendants are appealing their conviction and sentence of 12 months imprisonment and a collective fine of 30 million kronor ($4.4 million) payable in compensation to a slew of record and film companies.

The district court judgement stated that The Pirate Bay facilitated “an unlawful transfer to the public of copyrighted works”. In passing judgement, the court also wrote that the four defendants worked as a team for the maintenance of The Pirate Bay.

Meanwhile, defence attorneys for the four men all argued that their clients should be acquitted or have their penalties reduced.

“I don’t want to be unkind toward Classe Rosvall, but he can’t show a PowerPoint presentation yet thinks #spectrial# is ‘uncomplicated,’” Sunde wrote on his Twitter account, using an abbreviation for the Pirate Bay trial which came into fashion during the district court hearings.

In the afternoon, Rosvall outlined evidence which he claimed proved the four men were all involved in either operating or financing The Pirate Bay, and that they knew the site’s purpose was to allow users to share copyrighted material.

Among the evidence presented by Rosvall was an email from Lundström to his lawyer in which the heir to the Wasa crispbread empire wrote that The Pirate Bay facilitates internet piracy.

The email also included reflections by Lundström on whether the site should be moved to another country or shut down altogether.

“We’re surrounded by the Anti-Piracy Agency (Antipiratbyrån). Should we shut it down or risk ending up in jail,” Lundström wrote in an email, according to Rosvall.

Speaking later with the Aftonbladet newspaper, Sunde made it clear he would rather be anywhere but back in a Stockholm courtroom.

“This is really boring. It’s a waste of time. It’s going to be appealed no matter what happens,” he told the newspaper.

“This is going to the Supreme Court.”

The Pirate Bay, one of the world’s most popular BitTorrent trackers, meanwhile remains open and has more members than ever, despite several attempts to force its closure.

All of the four defendants are resident overseas. Carl Lundström in Switzerland, Fredrik Neij in Thailand, Peter Sunde in Germany and Svartholm Warg, in Cambodia.