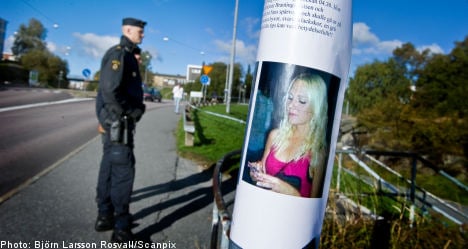 Västra Götaland police confirmed on Tuesday that the body discovered Monday evening near a tram station in Länsmansgården in Gothenburg was that of 27-year-old Elin Krantz.

Krantz and a friend were heading home on the number 5 tram line from the Valand nightclub in downtown Gothenburg around 4am Sunday morning, according to the Aftonbladet newspaper.

While Krantz’s friend got off the tram at the Hjalmar Brantingsplatsen stop, the 27-year-old continued in the direction of Gropegårdsgatan. But she never came home.

Police refuse to divulge any details about how Krantz was killed or whether she may have been killed in the place where her body was found.

They also won’t say where the suspect was arrested or how old he is.

Krantz was one of two young people who went missing over the weekend from the Hissingen area of Gothenburg.

Police divers spent much of Tuesday searching the waters of the Göta River, but failed to find any clues. Divers will likely be in the water again on Wednesday, according to Aftonbladet.

The last anyone heard from Johansson was a telephone call he placed to his sister around 11.30pm on Friday night. According to his sister, Johansson felt threatened, but the cut off before she was able to learn where he was.