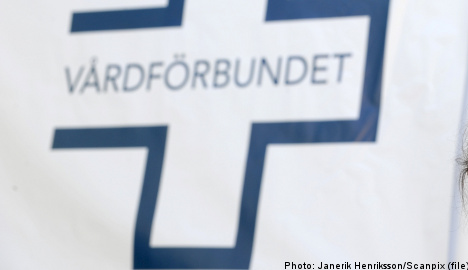 “To be a nurse or a midwife is based on protecting people’s rights and equal value. You have to reflect on the fact that perhaps not everyone fulfills those guidelines,” Anna-Karin Eklund, chair of the Swedish Association of Health Professionals (Vårdförbundet) to the TT news agency.

According to a report in the Dagens Nyheter (DN) newspaper, several labour groups are exploring various ways to shut Sweden Democrats out of their activities.

Eklund emphasizes that the ban only encompasses active Sweden Democrats who represented the party during the recent general elections.

“They can join a union, but not in the Swedish Association of Health Professionals. Not everyone can be a part of us,” said Eklund.

An elected member of the IF Metall industrial union is set to have his membership in the union put under review after he ran as a Sweden Democrat and won a seat on a municipal council.

“The Sweden Democrats’ ideas stand in conflict with everything we stand for, but you can’t just throw them out automatically,” said IF Metall’s vice chair Anders Ferbe to DN.

“We exclude active Sweden Democrats from membership. Their ideas aren’t compatible with our statutes and the fact that they’ve gotten some kind of legitimacy by getting elected to the Riksdag and local councils doesn’t matter,” said TransPort’s third vice-chair Martin Viredius to DN.

SKTF, a union representing salaried employees in the public sector, has previously made it clear that active Sweden Democrats cannot hold elected leadership positions within the union.

“We sometimes get an analogous question. ‘Can an attorney be a Nazi and a member of the Bar Association?’ And yes, he can,” Ramberg told TT. “It’s the other side of democracy that people have freedom of religion, speech, and opinion.”

She made a comparison with a “distasteful” discussion in the United States, where Republicans argue that lawyers the US president wants to hire ought to be disqualified if they at one time represented prisoners held captive at the US military’s base in Guantánamo Bay, Cuba.

“It lets down the employees represented by unions that they do not put their interests ahead of their own political interests,” he said.

In response to a question as to why the unions have decided on this course of action Almqvist replied, “The leadership in many union have become somewhat corrupted by too many years of involvement with social democracy.”

When asked why it was okay for the Sweden Democrats to exclude those who do not share their value system and not the unions, Almqvist replied, “But we are a political party. Our interest is to change society according to certain political ideas, while the purpose of unions is to safeguard the interests of workers in the labour market.”

Those who are excluded from a union have the alternative of pursuing the matter through legal channels, often through an arbitration procedure.