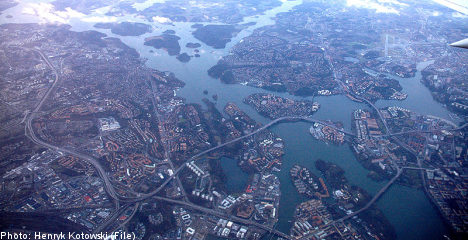 View of Stockholm from an aircraft

The Security Service has decided to raise the terror threat level by one step from low to elevated. This equates to a shift from level two to three on an escalating scale of five.

“This is a balanced assessment of the intention to commit a crime and the ability to commit crimes,” said Security Service head Anders Danielsson to news agency TT in explanation of the decision.

Magnus Ranstorp, Research Director at the Center for Asymmetric Threat Studies (CATS) at the Swedish National Defence College, told The Local on Friday that while the move to an “elevated” threat level was unprecedented, it means in practice “alert but not alarmed”.

“It means that they are looking at the situation. It is in focus. It could also be a way to signal that ‘we are looking at you’, to try to pull them in,” he said while pointing out that compared to the situation in several other European countries, the threat level to Sweden remains low.

Had the threat been imminent the threat level would have been raised straight to five, Ranstorp explained, adding that “it could just as easily be lowered back to two.”

The decision was made in mid-September and the government was immediately informed, while the news was only made public on Friday.

Sweden’s National Centre for Terrorist Threat Assessment (NCT), which based

its findings on what appeared to be “a shift in activities among certain groups in Sweden, judged to be targeted at Sweden.”

“The Security Service is taking comprehensive measures to acquire further

information and to reduce the threat,” the statement said, pointing out that the

information it was working with was classified.

To reduce the threat could involve the detention of the person or people involved, Anders Danielsson said, while declining to say whether any arrests had been carried out.

“I unfortunately can not say anything about that, for several reasons as it would complicate solving the task. If we have not yet detained anyone it could complicate an arrest.”

When asked if the change in the terror threat level would have be noticeable by citizens, Danielsson replied:

“No, not really, but of course someone may see something.”

The Security Service was unwilling to confirm whether the move has any connection with recent warnings of terrorist attacks in Europe from several security services.

Terrorist-trained Islamists carrying European passports are reported to have arrived in Europe, or are on their way, from camps in Pakistan with the intention of carrying out spectacular attacks on European cities.

It is reported that the planned attacks are similar in nature to the raids in Bombay, India in 2008, according to UK security services to Sky News. The attacks targeted luxury hotel and a major train station, killing 166 people.

The security services are reported to have received the information from a 36-year-old German citizen, arrested in Kabul in July.

Magnus Ranstorp argued that while he was aware of the information, Sweden’s threat situation is more defined by links to Somalia and al-Shabaab adding meanwhile that he expected foreign security services to be monitoring the situation.

“There is a lot of focus on Somalia and al-Shabab. But this is mostly fundraising and recruitment,” he said, while ruling out that the election of the anti-immigrant Sweden Democrats into parliament had anything to do with the situation.

“I can say that I have heard on good sources, that it has nothing to do with the Sweden Democrats,” Ranstorp said.

Chief prosecutor Tomas Lindstrand at the Public Prosecution Office for Security Cases (Åklagarkammaren för säkerhetsmål) was on Friday unwilling to comment on whether an investigation had been launched.

“If there are any criminal investigation or whether anyone has been arrested, I would not answer for reasons of the investigation and of all the reasons in the world,” Lindstrand said.

He was neither prepared to specify where in Sweden the “altered activity” had been noted nor whether Islamists were behind the escalating threat.