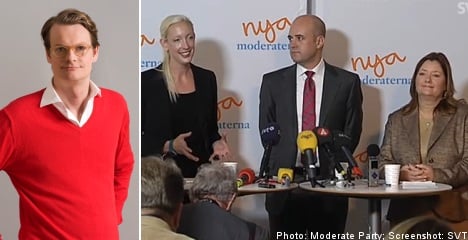 Arkelsten has been a member of parliament since 2007 and has served as the party’s environment policy spokesperson.

“We can be a bigger, broader and sharper party,” said Sofia Arkelsten in a press conference with Prime Minister Fredrik Reinfeldt on Friday.

The renewal of the new Moderates will continue, Arkelsten stated.

“Without change we are not relevant,” she said.

33-year-old Arkelsten is the first woman to fill the post of party secretary for the Moderates and she will be joined by Gunilla Sjöberg in a new post of assistant party secretary.

Sjöberg is 49-years-old and has worked for the Moderates since 1989, primarily with opinion analysis, and has since 2007 been the head of the party’s field organisation.

At the press conference on Friday Fredrik Reinfeldt identified several areas in which the party plans to develop under the new party secretary, with one challenge being to attract more young voters.

“In this area there is a great deal for the Moderates to think over,” he said.

The Moderates also plan to grow among the employed.

“We can develop even more among public sector employees,” Reinfeldt said.

Reinfeldt was unwilling to divulge what the next career step could be for Per Schlingmann.

“He has other things to do, but I am not going to say what that is today.”

Per Schlingmann, who turns 40 in a few weeks, served previously as the party secretary for MUF, the Moderates’ youth wing, as well as the Moderate Party’s head of communications.

He became Moderate party secretary in September 2006, taking over from Sven Otto Littorin, who went on to become the employment minister in the first Alliance government.

Schlingmann is credited with coining the term “New Moderates”, which was meant to capture the party’s shift to the centre ahead of the 2006 election campaign.

He also came up with the slogan “The only workers’ party”, which the Moderates employed during their 2010 election campaign to reference what the party had previously termed “pro-employment policies”, much to the frustration of the Moderates’ rivals on the left.