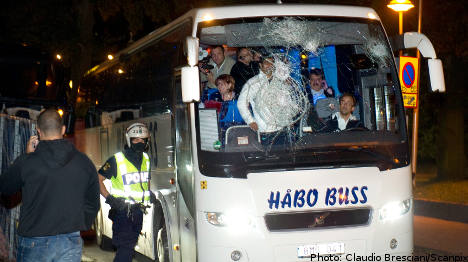 Every fifth Swedish football player, almost every third Allsvenskan club official, and every other referee, has been subjected to threats or harassment, the survey shows.

Disappointment over results, and controversial transfers, often lead to supporters directing their ire at their own clubs, not the opposition and their supporters, according to Gothenburg University social psychology researcher, Tore Brännberg.

“There are in fact few fights between clubs these days,” he claimed.

Brännberg’s understanding of the situation is that the most fanatic supporters, the leaders of the so-called hooligan firms, act as if they were members of religious sects.

“They think differently and see this as their religion, where AIK (Stockholm), IFK (Gothenburg), Malmö or whichever team, is the most important thing in their lives. When they think that something has gone wrong they have to act,” he said to TV4’s programme Kalla Fakta.

Kalla Fakta in the spring surveyed players and officials with the 16 Allsvenskan teams, as well as Hammarby and Örgryte, both relegated in 2009.

Of the 303 players who responded, 18 percent had been subjected to threats or harassment over the past five years. Among the 81 club officials the figure came in at 31 percent.

Referees however stood for the highest proportion of threats and harassment, with 51 percent of match officials responding that they had fallen victim.

Despite the shift in hooligan tendencies, running battles do occur between supporters of different clubs in the Swedish top flight and as the season drew to a close this weekend police reported several incidents.

Skåne police have reported that around ten people were detained in connection with unrest at a match between high-flyers Helsingborg and Gothenburg club Gais. Three people have subsequently been arrested on suspicion of rioting, aggravated assault and assault.

In Stockholm, a match between crisis-hit Hammarby and Södertälje club Syrianska led to the arrest of 17 people on suspicion of rioting.

Police units were dispatched to the scene, where one person is reported to have been taken to hospital with injuries sustained in the clash.

Earlier in the week AIK were served with a 550,000 kronor ($82,000) fine by Uefa following an incident after a Europa League match in August when a coach carrying players and officials from the Bulgarian club Levski Sofia was attacked with stones and bottles.

AIK’s hooligans have cost the club financially on several occasions recently, with a further 140,000 kronor imposed in August after rioting in connection with a Champions League qualifier against Norway’s Rosenborg.