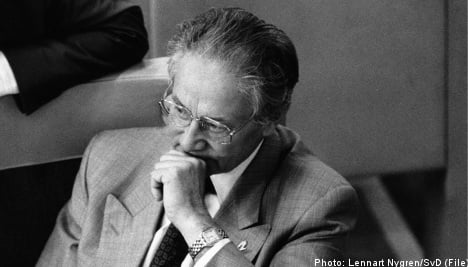 The secret 5 million kronor ($740,000) ransom payment, made in 1988, is described in a new book by Norwegian journalist Karsten Tveit, according to Sveriges Radio (SR).

Swede Jan Stening and William Jörgensen from Norway were working to assist Palestinian refugees in Lebanon when they were kidnapped in February 1988.

They were released three and a half weeks later, according to the Aftonbladet newspaper.

The Swedish foreign minister at the time, Sten Andersson, credited the release of the two hostages to “quiet diplomacy”.

“This is a triumph of quiet diplomacy and I want to thank the Swedish diplomats who participated,” Andersson told Sveriges Radio (SR) at the time.

According to Tveit, however hostages’ release was secured by a ransom payment using money from a secret fund managed by the Swedish defence ministry.

He writes in his book that Sweden’s ambassador to Lebanon at the time, Rolf Gauffin, was contacted by the Palestinian kidnappers who claimed they would kill the hostages if they didn’t receive half a million dollars.

But it was only after defence minister Roine Carlsson was informed of the ransom demand that Schori was told of the secret fund, according to Tveit.

Other noteworthy revelations in the book include claims that United Nations soldiers from Norway helped two Lebanese who had escaped from an Israeli-controlled prison in south Lebanon in 1992.

The Norwegians feared that the Lebanese would be tortured and possibly killed if they were handed back to the Israelis or the South Lebanon Army (SLA).

To aid the two in their escape, the Norwegians dressed them up in Norwegian UN uniforms and joined a convoy of Norwegian tanks driving out of the Israeli-controlled area.

The incident, which was kept secret for 18 years, has been confirmed by a member of the Norwegian military.

Tveit told Norwegian radio station NRK that Sweden’s decision to pay the ransom may have increased the risk for other kidnappings.

“It was almost like giving the go ahead for new kidnappings because people immediately got the idea that Norway and Sweden paid out ransoms. It could have been extremely dangerous and led to new kidnappings,” the author told NRK.

Tveit said he has worked several years to reveal the Swedish government’s double dealing. He noted that Swedish secrecy made it hard to write the book.

LEBANON
‘Sweden stands ready to help Lebanon after the explosions in Beirut’
Url copied to clipboard!