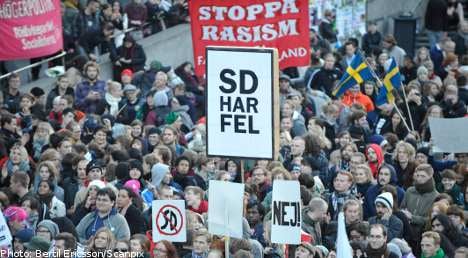 The demonstrators gathered on Sergels Torg in central Stockholm to listen to speeches and then began a march towards Sweden’s parliament, the Riksdag, on Myntorget.

Behind the demonstration were the anti-racism groups the “September Alliance”, Stockholm’s anti-racist culture association, and various Facebook groups, with speeches held by, among others, Left Party leader Lars Ohly.

Similar, if smaller, demonstrations were held across the country on Monday evening.

The demonstration was a repeat of the massive spontaneous turnout on the day after the Swedish general election, which left the Sweden Democrats with 5.7 percent of the vote and 20 seats in parliament.

Monday was the first day the new members of parliament gathered in the chamber, for a roll-call and to vote on various officials, including the speaker and deputy speakers.

The Sweden Democrats had attempted to use the speaker election to push for negotiations with the major parties as the party stood to hold the balance of power, but neither the Moderates nor the Social Democrats took up the offer.

While the Sweden Democrats in the end elected to vote with the Alliance candidate, Per Westerberg, the party’s 20 votes had no impact on the outcome as he was returned to the post by 194 votes to 153.