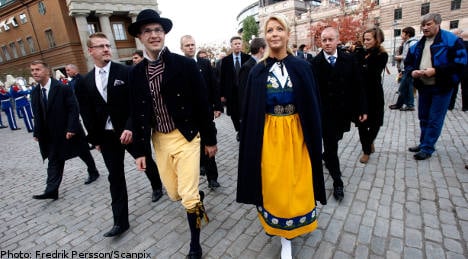 Most newspapers who addressed the subject believe the decision by Jimmie Åkessson and his fellow Sweden Democrats to leave in the middle of Bishop Eva Brunne’s speech reveals the party’s true colours and exposes them for the racists that they so strenuously deny that they are.

“An odd reaction by a party leader who energetically claims that his party doesn’t harbor any racist opinions,” writes the Göteborgs-Posten (GP) newspaper.

The social democratic leaning Arbetarbladet writes that the polish has been rubbed off and the party’s message stood openly exposed to the public gathered outside the church.

According to the liberal Gefle Dagblad (GD) newspaper, the Sweden Democrats’ “spectacle” clarified the party’s politics “in a painful way”.

“If the bishop’s sermon about respecting all peoples’ equal value and against racism is an agitation against the politics of the Sweden Democrats, it means that the party’s politics stand opposed to her message,” writes the newspaper.

Leader writer Peter Wolodarski of the independently liberal Dagens Nyheter (DN), points out that other parties’ attempts to freeze out the Sweden Democrats, which included demands for separate queues in the Riksdag canteen, are not only childish but also counterproductive.

“They strengthen the Sweden Democrats feeling of isolation and complicate constructive parliamentary work. And it helps people nod in agreement when Jimmie Åkesson speaks of a political buffoonery,” writes Wolodarski, while concluding that the walk out says more about the Sweden Democrats than the bishop.

Other newspapers addressed the challenges facing Fredrik Reinfeldt in his decision to move forward with a minority government, with most agreeing that the prime minister must have had a difficult time putting his team together.

Compromise is the leading word, writes the independently liberal Sydsvenskan. The downside, according to the liberal Expressen tabloid, is that some of the minister portfolios appear suspiciously thin.

“What exactly will Anna-Karin Hatt (of the Centre Party) do as minister for IT and regional affairs?” the paper asks.

And the social democratic leaning Aftonbladet tabloid was less than impressed with Reinfeldt’s presentation of the government’s policy platform, claiming that the government has run out of ideas.

“The main message was that policies will remain the same,” writes Aftonbladet.

The conservative-leaning Nya Wermlands-Tidningen (NWT) is also critical that Mats Odell of the Christian Democrats has been replaced by Moderate Peter Norman.

“Here the government will lose an experienced and capable force simply to allow Anders Borg to run the show and put a totally Moderate-controlled finance ministry in place,” writes NWT.

“Borg picked his own man. Now it’s the slide-rules and spreadsheets of pragmatism that matter,” writes SvD.