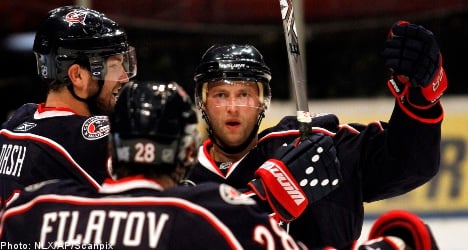 “I was a little nervous today to be honest,” the Sharks’ Wallin, a native of northern Sweden’s Boden north of Luleå, told NHL.com. “I’ve got a lot of people down here. But I think it’s great for Swedish people that the NHL is bringing the game over here.”

The match at Stockholm’s Globen was also the first NHL game played in Sweden that did not sell out, with 11,324 in attendance out of an ice hockey capacity of a 13,850 at the arena.

The close contest featured a total of 17 minor penalties and two fights.

Hometown favourite Murray from nearby Bromma said the nervousness hit him when he woke up on Friday morning.

“I had been really calm all week and when I woke up this morning, I started to feel it a little bit. Then pregame skate came about, and I was fairly calm again. I was enjoying the Swedish national anthem. That pumped me up. They should play it in the States more often,” Murray joked to NHL.com

Hometown hero Huselius, a native of Österhaninge south of Stockholm, netted the Jackets’ first goal of the season 16:55 in the first period on a power play, assisted by Strålman from Tibro east of Skövde.

Huselius took a cross-ice pass and roofed the puck over fallen Sharks goaltender Antti Niemi to cut the Sharks’ early lead in half. He was named one of the three stars of the game at the end of the match.

Pahlsson of central Sweden’s Ånge west of Sundsvall followed with an assist 15 seconds later. Despite the Jackets’ efforts, it was not enough as the Sharks sealed the win in the last 10 minutes of play after a scoreless second period.

“It was a close game and I think we showed great character coming back from two goals down, we really worked hard,” Huselius told NHL.com. “I think we played a heck of a game 5-on-5. We could have won the game just as well.”

The Swedes were involved in several penalties throughout the evening. The Sharks’ Wallin received calls for slashing in the first period and diving in the last period, while Murray was caught cross checking in the second period.

The Jackets’ Huselius received a call for tripping in the first period, Strålman was sent to the box in the second for hooking and Pahlsson was sent off the ice in the third for tripping.

Former Vancouver Canucks captain and Swedish star Markus Näslund received a standing ovation and the loudest cheers of the evening when he dropped the puck during a ceremonial faceoff.

Globen first hosted NHL games in 2000, when the NHL Challenge series came to Sweden. The first team to play against Swedish teams was the Vancouver Canucks in 2000, followed by the Colorado Avalanche in 2001 and the Toronto Maple Leafs in 2003.

NHL season openers in Sweden at Globen began in 2008, with the Ottawa Senators and Pittsburgh Penguins facing off on an modified rink altered to NHL specifications.

Last year, the St. Louis Blues and Detroit Red Wings played their season openers at Globen. The Jackets will have a chance to avenge their loss on Saturday evening at Globen in their home-and-home series opener at 9pm local time.