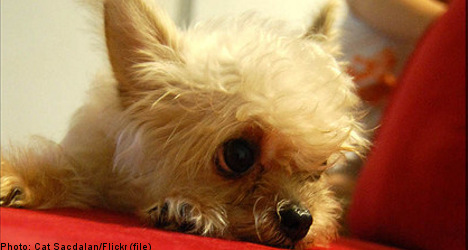 Kristoffer Ilveborn, a resident of Ystad in southern Sweden, had a verbal agreement with his former partner to jointly own and share the cost of Totte, a Shih Tzu/chihuahua mix, when the couple purchased the dog in the summer of 2008, the local Ystads Allehanda newspaper reported on Tuesday.

When the couple split in September 2009, Ilveborn moved to Ystad, while his ex-girlfriend moved to Gothenburg, a three-hour drive northwest.

Despite their separation, the couple agreed to continue with their joint ownership of the the dog, whereby Totte would move from one home to the other every four weeks.

The first exchanges proceeded smoothly. In September 2009, Ilveborn picked up Totte in Gothenburg and returned the dog in early November. However, when it was time for him to retrieve Totte the following month, the arrangement came to an abrupt end.

“I texted the week before and said I would come up. She then wanted to put it off and I suddenly I realised that I would not get Totte back at all,” Ilveborn told the newspaper.

After deliberating for some time, he decided to take his ex to court.

“I emailed [Swedish attorney and former politician] Peter Althin and described my case. He replied that I was entitled to Totte under joint ownership law. I then went and got a representative. There was no other way to go. I just want to meet Totte,” said Ilveborn, who paid 3,000 kronor ($450) of the 5,500 kronor buying price for Totte.

On paper, Ilveborn’s former partner is the sole registered owner of Totte. But Ilveborn is nevertheless demanding continued visitations with Totte and that his ex-girlfriend pay half the costs of the dog’s surgeries and veterinary visits, which amount to nearly 10,000 kronor, as well as the fees associated with the trial.

“It is quite clear that the parties bought the dog together. It is abundantly clear from the documents available,” he told the newspaper.

Ilveborn is eager to be reunited with his beloved pet.

“I am very attached to him. He is affectionate and playful even though he has had some illnesses and problems. We have been through so much together,” he said.