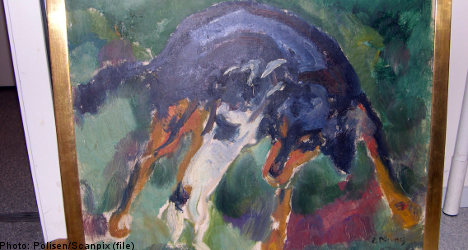 The 52-year-old man turned himself, telling police that he was aware of the three stolen paintings but denied committing any crime.

He and a 35-year-old man had completed sentences for previous crimes with an employment training programme which placed them at the museum.

An arrest warrant has been issued for 35-year-old man, who police believe also had a role in the theft of the paintings, which included a work by Edvard Munch with an estimated value of 10 million kronor ($1.5 million).

The theft occurred undetected by museum personnel, but was later uncovered during an unrelated police raid in an apartment in Landskrona in southern Sweden in which police stumbled upon the three works.

They are now convinced the theft was carried out with help from the inside.

“The (35-year-old) suspect was employed at the museum,” said Magnus Nilsson of the fraud unit of the Malmö police, to the TT news agency.

According to the Kvällsposten newspaper, the 35-year-old has sent a message 0through his relatives that he plans to turn himself in to police in the next few days.

The 34-year-old man who lived in the apartment where the paintings were found has been in custody since Saturday on suspicion of receiving stolen goods.

He is also suspected for serious fraud related to a credit card “skimming” scam involving taxis. The 34-year-old admits that he had the paintings in his apartment, but denies committing any crime, claiming he didn’t know what the paintings were or that they were stolen.