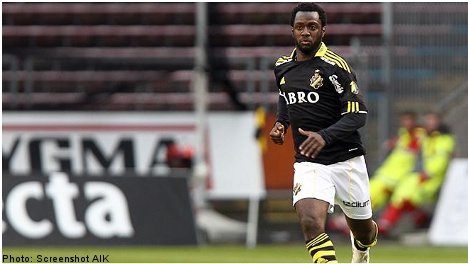 The news of Johnson’s arrest is the latest in a string of setbacks for the Solna-based club, which was recently fined by UEFA following crowd trouble, and provoked strong reactions from key sponsors.

The club’s main backer, the brewer Åbro, issued an ultimatum on Wednesday telling the club to suspend Johnson within 24 hours or lose its sponsorship. Other sponsors followed suit in calling for action.

“We give AIK a day to get rid of Dulee Johnson. He harms the club too much,” Åbro CEO Henrik Dunge said. “It harms us too much if he remains. He is a talented footballer player but he has to go.”

A further key AIK sponsor, construction firm Peab, has argued that Johnson should be sacked from the club, regardless of whether he is freed from the rape allegations.

“It is a personal tragedy how he blusters and wrecks AIK’s and the sponsors’ trademarks,” Peab vice-CEO Mats Johansson said.

In statement on the club’s webpage on Wednesday afternoon AIK confirmed that Dulee Johnson has been suspended “until further notice”.

“AIK Football has suspended midfielder Dulee Johnson until further notice. We will return when there is more to report on the matter,” the statement read.

The playmaker will thus be unable to play in Saturday’s relegation battle at home to Gefle IFF, and is a doubt for the club’s remaining three matches.

The 24-year-old was taken in questioning by police on Tuesday in connection with allegations that he raped a 22-year-old woman in his Solna home in May. He has been formally arrested and the prosecutor will take a decision on Thursday whether to remand him into custody.

Evidence against the Liberian star is reported by the Aftonbladet daily to be strong and is based on witness testimony from a friend of the player’s who was in the apartment at the time of the alleged assault.

The player denies the allegations and his lawyer Mikael Lindén, called AIK’s decision “hasty” in an interview with the newspaper.

“People should regard him as innocent until proven otherwise,” Lindén said.

Dulee Johnson has been embroiled in a series of scandals during his time playing for AIK and Häcken in Sweden. He has been convicted of drink driving on several occasions and was in 2005 convicted of assaulting his then girlfriend, receiving a sentence of 60 days community service.