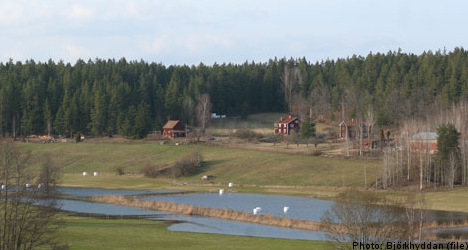 The area around Västervik in southeastern Sweden is one part of the country that is attracting many of these migrants. As Sweden grapples with a projected shortage of workers in certain sectors in as little as 10 years when current employees retire, municipalities across the country are racing to attract skilled workers and entrepreneurs to their communities.

"We see a trend that more people are coming, especially people from other countries in northern Europe: not necessary Scandinavia, but Germany and the Netherlands," says Hanna Hägg of the municipality and immigrant service of Västervik.

She cites the example of Germany's Maren and Fred Ziechmann, who moved to Rumma, 25 km northwest of Västervik, last year to open Björkhyddan, a three-room bed and breakfast and bakery. Although their home is not red, the landscape is dotted with the red cottages and outbuildings of neighbouring farms.

The couple in their 50s, who had previously lived in China and Japan for seven years, initially came to Sweden last year during a five-month, 6,200-km cycling vacation through Norway, Sweden and Finland. They fell in love with Sweden. Returning to Berlin on September 21st, they started looking for houses in Sweden in November and signed a contract the following month.

"Fred and Maren came because they had a busy life with a lot of work. They were looking for nature and less stress and started a business in the countryside outside Västervik. They are good ambassadors for Sweden. Many German tourists come to the region thanks to them," says Hägg.

Hägg points out that while many German and Dutch migrants find house prices affordable in Sweden compared to Germany and the Netherlands, a stronger motivation for moving to Sweden involves leaving behind stressful lives and overpopulated areas.

"We see a lot of people move from the big cities to the countryside. Fred and Maren started the business not necessarily to make a lot of money. They live there and make some money, but it's mostly for the lifestyle – they wanted something different. They have a bakery and are artists as well – they paint beautiful paintings," says Hägg.

Hägg points out that Västervik welcomes migrants like the Ziechmanns with open arms. By living in the countryside, they help to keep services such as buses running in sparsely populated areas.

In addition to couples like the Ziechmanns, who have adult children, Hägg and her other colleagues at other municipalities across Sweden work together to actively recruit families with children to move to their regions. Hägg says young families are attracted to Sweden because of the high quality of life, safe environment for their children and proximity to nature.

Hägg estimates that 900 Dutch immigrants move to Sweden every year and an equal number from Germany. New residents are attracted to the Västervik region because it is close to the sea, which is especially important to Dutch migrants, and the archipelago, which provides a uniquely Swedish landscape.

Like the Ziechmanns, many German migrants are initially tourists and are specifically drawn to Småland, the southern Swedish province in which Västervik is located, due to a love for Pippi Longstocking author Astrid Lindgren's books and stories. The archipelago is also exotic to German visitors to Västervik and the many elks in the area are a big attraction.

What Hägg has found is that similar to the Ziechmanns' story, many tourists come in the summer and ask her about moving to Sweden after returning home.

"It's a decision that takes a lot of time, moving and leaving your safe life to start something new, learning the language, looking for a job, getting the kids into school. A lot of pieces have to fall into place. Sometimes it takes a year, sometimes seven to 10 years. Few people just pack their bags and move," says Hägg.

Migrants who come to Västervik tend to find work in their fields or branch out on their own like the Ziechmanns if they prefer to remain independent.

"Entrepreneurs are always good for a country," notes Hägg.

Although Germany and the Netherlands are the current sources of targeted emigration from European countries, Hägg foresees tourists from other densely populated countries that will come calling in the future as well.

"Tourism is the window for people to move to Sweden. They see Sweden when they come as tourists. That's when the seed starts to grow because they like nature and the way Swedish people are. They experience something and they want more than just the tourist part. They start to think, 'This is the place where I want to live,'" observes Hägg.

This article was produced by The Local and sponsored by Västervik.