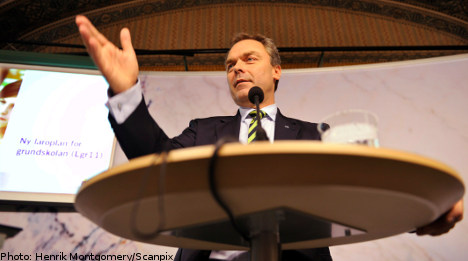 The initiative comes as the government is set to open talks with opposition parties over a broad review of the regulations governing Sweden’s publicly-funded, privately-managed free schools (friskolor).

Among the issues scheduled for discussion is the controversial subject of for-profit education and to what extent free schools should be allowed to withdraw profits if they are found to not live up to minimum quality standards.

“We have said that we need to review the regulations, which are out of date having been framed back in the 1990s,” said Anders Andrén, head of press at the ministry of education, to The Local on Thursday.

“We are not against profits, as long as schools meet their obligations,” he said.

Sweden’s education minister Jan Björklund last week invited the Green Party and the Social Democrats, but not the Left Party, to cross-bloc talks on regulations for free schools.

“We have invited in the Social Democrats and Greens for talks as we are in agreement that free schools should be able to make a profit. The Left Party have a different position to the other six parties on this issue,” Andrén said.

Sweden is one of the few of countries which allows independent schools financed with public funds to make a profit.

The debate remains controversial however after a series of high profile cases in recent years of large dividends paid to owners of schools and pre-schools in the private sector.

The Left Party is the only party which wants to rule out profits entirely, arguing that the withdrawal of public funds from operations impacts the quality of teaching.

The other parties more or less support the freedom to make profits, and discussions are set to focus on how to introduce regulations to curb excess.

“We have said that if free schools have been reprimanded, have been fined and so on, then we want to look at restricting profits in some way,” Anders Andrén confirmed to The Local.

The Swedish Teachers’ Union (Lärarförbundet) has meanwhile published a report ahead of its November congress arguing that teacher/student ratios should be used as a measure of quality.

The union cites new National Agency for Education (Skolverket) figures which show that teacher/student ratios vary significantly according to a number of factors, one of which being the organization of the schools.

While municipal-run schools had the equivalent was 7.9 students per 100 teachers, for-profit free schools only had an average 6.8 teachers per 100 students.

Free schools run on a not-for-profit basis came out on top – with 8.6 teachers per 100 students.

But despite the figures the union is positive to the current situation of allowing profit within the education sector.

“We are not against profits, but we have said all the time that education must be focused on quality,” said union press spokesperson Claes Nyberg to The Local on Thursday.

Nyberg said that while the figures have been known for some time “no one has ventured to talk about them”, adding that the union would welcome the discussion.

“The figures show that there is a connection, but that it would be linked to profits per se is a conclusion that can’t be drawn. But the issue is something that needs to be looked at,” he said.

The number of free schools in Sweden has steadily increased in Sweden since the 1992 schools reform which allowed for the public financing of privately-run schools.

At the end of 2009 some 46.9 percent of all high schools (gymnasium), and 15.2 percent of primary and secondary schools (grundskola), were independently run, according to agency figures.

The figures also show that free schools at the “grundskola” level (grades 1-9) are becoming increasingly popular, with student numbers up 7 percent over the past year to 96,000. Student numbers at municipal-run schools dropped from 906,000 to 892,000 over the same period.

There are significant variations across the country with 32 municipalities having no students in free schools at the “grundskola” level, while in 14 municipalities, 20 to 43 percent of students attended a free school.

Free schools are managed in a plethora of ways – including limited companies run for profit, parent and teacher cooperatives, and charitable foundation schools.