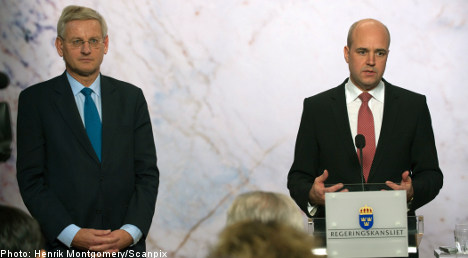 “We have had initial and very good talks with Mona Sahlin and we shall have new (talks) next week,” Reinfeldt said afterwards.

The meeting between Sahlin, Reinfeldt, and foreign minister Carl Bildt, lasted about an hour shortly after lunch on Thursday.

“I consider that the possibilities exist for a seven party agreement in the parliament,” Sahlin said.

“The chances are considerable. We have all expressed an eagerness and need for the Swedish troops’ future in Afghanistan to be solved in a broad manner, across the political blocs.”

“It sounds like they are open to discuss. There are definitely openings from the government side which are interesting,” Wetterstrand said.

According to Wetterstrand the Red-Green parties will now conduct individual, internal discussions as to whether they will open negotiations with the government. The Green Party’s parliamentary group will meet tomorrow.

The Red-Green leaders will then together discuss the mandate that they are prepared to give Mona Sahlin in the talks. Wetterstrand argued that another alternative is that all party representatives, and not just Mona Sahlin, participate in the negotiations.

The Red-Greens were offered two chairs at the talks but Mona Sahlin decided to go alone as a protest at what Lars Ohly claimed on Thursday was a clear attempt to split the Red-Green opposition.

When Sahlin was asked if an agreement was possible without the Left Party, she replied:

“My presumption is that we move forward as a Red-Green opposition and the government needs to seek broad-based support in the Riksdag. The best thing would be for all, except the Sweden Democrats, to be together in that agreement.”

Foreign minister Carl Bildt wrote on his blog on Thursday that he has assured his Finnish colleague Alexander Stubb that Sweden intends to continue to cooperate closely with Finland over Afghanistan:

“It is important to know that we have a joint Swedish-Finnish military contribution in Afghanistan,” Bildt wrote and argued that “within this lies a strength for us both”.

Finland currently has 180 personnel in Afghanistan, to be increased to 195 by the spring.

Bildt also referred to talks in recent days in Moscow.

“Here there is a tangible concern that we and others will leave the country with the work only half done. And then there is a fear for the consequences in various respects.”