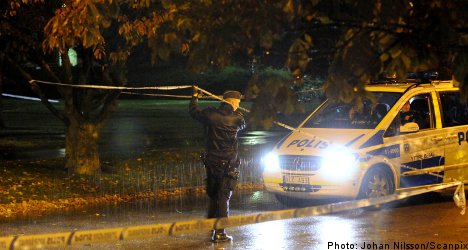 The man was riding on a bicycle path near the Mobilia mall. He was not hit. Police received an initial report at 7.01pm and made contact with the man, who had fled from the spot, eight minutes later. The man promised to point out the exact location of the alleged shooting, adding that an unknown man had run away from the scene.

“As citizens of Malmö, regardless of nationality or origin, we must have public safety in mind,” Åsa Palmqvist of the Malmö police told reporters on Friday.

Police this week said they were setting up a task force of up to 50 police officers to look into around 15 unsolved shootings in the southern city of Malmö, Sweden’s third-largest, over the past year, which could be motivated by racism.

The crimes bear a chilling similarity to the case of an immigrant-shooting sniper in Stockholm in the early 1990s.

Police were cautious in drawing parallels between the two cases, but the Swedish press quickly picked up on the similarities, with the country’s two largest tabloids on Friday saying that police were searching for “a new Laserman.”

Laserman was the nickname given to John Ausonius, who shot 11 people of immigrant origin, killing one, in and around Stockholm from August 1991 to January 1992.

Daily Dagens Nyheter reported on Friday the profiler who helped solve that case had joined the investigation team in Malmö.

Police in Malmö did not divulge the details of the investigation, only telling a large crowd of reporters — some them from Denmark and Norway — that they were receiving help from various Swedish police corps.

They also warned residents against panic, stressing a text message appearing to come from police that had been circulating urging people to stay indoors was fake.

On Thursday, two women aged 26 and 34 were slightly injured when someone shot them through a kitchen window. A teenager driving a moped was also shot at in broad daylight earlier in the day, but was not hit.

In both cases, the victims were of immigrant origin, police said.

Börje Sjöström of the Malmö police said there was a risk of more shootings in the city, but stressed Malmö was still safe.

“For an individual person, the risk is extremely small,” he said.

In many of the unsolved shootings over the past year, the victims had not adopted risky behaviour and were simply going about their daily business, he said.

“Many of those who were affected were in completely normal situations. It is not risky behaviour to work out at the gym or to wait for the bus,” Sjöström said, insisting that “the worst thing people can do is to lock themselves in and capitulate.”

Just as with the Laserman case, the recent shootings in Malmö come at a time when an openly anti-immigration party has just entered the Swedish parliament.

This year, the anti-immigrant Sweden Democrats won 20 seats in parliament in the September 19th election with an especially strong showing in the south of Sweden.

Gellert Tamas, who wrote a book about the Laserman in 2002, said the current political situation could be an inspiration for today’s shooter, much like the anti-immigration New Democracy party inspired Ausonius.

“John Ausonius was very clear in the interviews I did with him that he was inspired by the debate on immigration that took place in the early 1990s,” he told Dagens Nyheter.

“He felt moral support, that people were behind him. But he also felt political support, from New Democracy above all, but also from other xenophobic parties such as the Sweden Democrats,” which had just been created, he added.

Of the Malmö shootings being probed, only one has resulted in a death: a 20-year-old woman of Swedish origin who was shot last October while sitting in a car with a young man of immigrant background. He was seriously injured in the attack.

Separately, Malmö mayor called on Justice Minister Beatrice Ask to act on demands from the police and city of Malmö to hike the penalties for possession of illegal arms, writing she should “take her mission seriously or resign” in Dagens Nyheter’s opinion page on Saturday.

Reepalu believes that Malmö residents have been affected by lack of action in this area in an unacceptable way.

“I become furious when the Minister of Justice says in the newspaper that it is ‘understandable’ that gang shootings take place in Malmo,” he wrote in Dagens Nyheter.